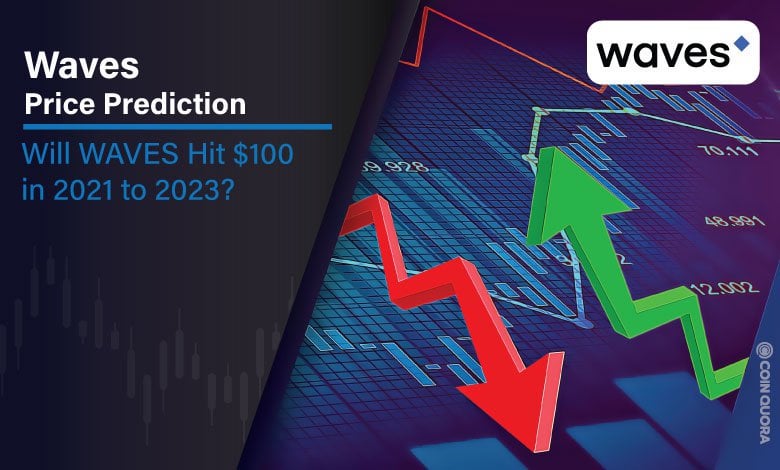 This WAVES Price Prediction 2021 to 2023 article is based on technical analysis alone. Below, you will see the key metrics that we have taken into consideration upon coming up with our WAVES coin price prediction and analysis.

Waves (WAVES) is one of the cryptocurrencies that surprised the crypto world during the beginning of the year. Interestingly, WAVES broke its all-time-high record in Dec 2017 when it surpassed $20 in April this year. But that is not all. WAVES has also succeeded in nailing a growth rate of over +1000% in the past 12 months. As a result, WAVES is now one most talked about virtual asset in the crypto world.

With all these achievements, we can say that Waves is a cryptocurrency with a lot of potential. In terms of its technology, the network uses a variation of the proof-of-stake (PoS) consensus mechanism called leased proof-of-stake (LPoS). Best of all, this LPoS of Waves enables full nodes to earn a profit after producing new blocks in the platform.

In this WAVES price analysis and price prediction, we take a look at the performance of WAVES if it will reach $100. But before that, let us learn more about what is Waves (WAVES) and its current position in the crypto market.

WAVES is a platform based on blockchain technology. It is designed to provide developers an easier way to create cryptocurrency without the need for extensive smart contract programming. As a result, tokens in the Waves blockchain can be managed and created using scripts that run on user accounts. Truly, Waves help developers fast-track crypto creation on its platform.

The network has its own native virtual asset called WAVES. These tokens are used to reward all the participants inside the WAVES network. In addition, WAVES tokens are also utilized as a payment for all the fees transacted in the platform and its ...