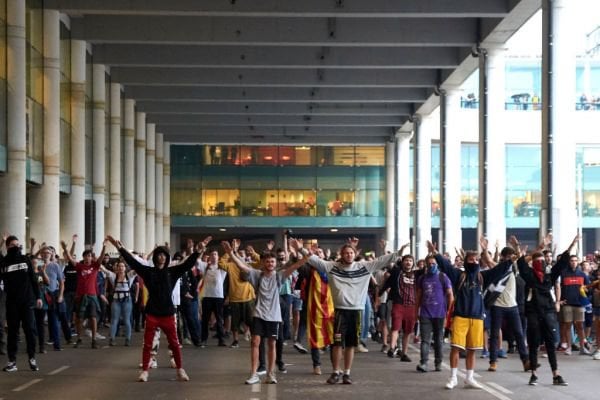 Microsoft-owned Github has removed the APK of an app for organizing political protests in the autonomous community of Catalonia — acting on a court takedown request sent by Spain’s Guardia Civil, a national police force with military status.

As we reported earlier this month supporters of independence for Catalonia have regrouped under a new banner — calling itself Tsunami Democràtic — with the aim of rebooting the political movement and campaigning for self-determination by mobilizing street protests and peaceful civil disobedience.

The group has also been developing bespoke technology tools to coordinate protest action. It’s one of these tools, the Tsunami Democràtic app, which was being hosted as an APK on Github and has now been taken down.

The app registers supporters of independence by asking them to communicate their availability and resources for taking part in local protest actions across Catalonia. Users are also asked to register for protest actions and check-in when they get there — at which point the app asks them to abide by a promise of non-violence (see point 3 in this sample screengrab):

Users of the app see only upcoming protests relevant to their location and availability — making it different to the one-to-many broadcasts that Tsunami Democràtic also puts out via its channel on the Telegram messaging app.

Essentially, it’s a decentalized tool for mobilizing smaller, localized protest actions vs the largest demos which continue to be organized via Telegram broadcasts (such as a mass blockade of Barcelona airport, earlier this month).

A source with knowledge of Tsunami Democràtic previously told us the sorts of protests intended to be coordinated via the app could include actions such as go-slows to disrupt traffic on local roads and fake shopping sprees in supermarkets, with protestors abandoning carts filled with products in the store.

In a section of Github’s site detailing government tak...