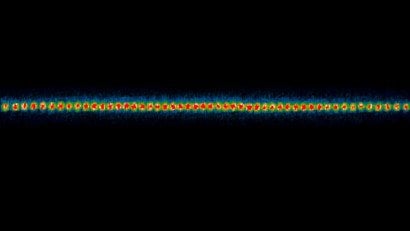 It's technology such as this that motivates us to continue our research.

A startup based in Maryland has released and tested an impressive new quantum computer that demonstrates the power of an occasionally overlooked quantum computing architecture.

Companies like IBM, Google, and Rigetti are developing new kinds of computer processors that rely on the mathematics of subatomic particles to potentially perform calculations difficult for classical computers to do. These devices use superconductors as the basis for their qubits. A company called IonQ, however, has now announced a state-of-the-art system that relies on the quantum nature of atoms themselves, and it’s one of the best-performing quantum computers yet.

How many qubits, or quantum bits, does it have? Well, these days, qubit count is a misleading number for understanding how powerful a quantum computer is. It’s more about how good those qubits are.

“If you look at raw gate count or qubit numbers or fidelity, it doesn’t tell the whole story,” said Christopher Monroe, IonQ’s co-founder and chief executive and a physics professor at the University of Maryland. “What we’re trying to push is on is the idea that having standard metrics,” like algorithm performance, is more useful for comparing quantum computers.