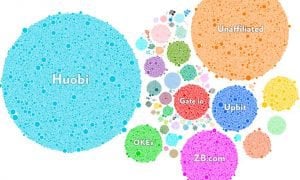 Chinese crypto exchange Huobi has been heavily favored in PlusToken withdrawals with nearly 50% of all withdrawals sent to the exchange, according to a study released by Elementus, a New York-based blockchain infrastructure firm.

As 8btc reported earlier this month, PlusToken’s mass bitcoin sell off in major exchanges may have been responsible for the latest dip in bitcoin price. Identified as the largest Ponzi scheme in the crypto space to date, PlusToken made off with a whopping $3 billion worth cryptocurrencies, including 200k BTC, 800k ETH and 26 million EOS at least. However, the actual numbers are much larger than these estimates.

As per the research, PlusToken’s network of approximately 100 addresses on the Ethereum blockchain took in nearly 10 million ETH from 800k participants, of which, 820k ETH is still sitting cold on the blockchain with no movement of funds in or out since the end of June, while the remainder, 9.2 million ETH, has been sent out to 248k different addresses.

The study pointed out that the payouts, though, were distributed across 248k different addresses, the amount of ETH was heavily concentrated in a few recipient addresses, claiming “half of the ETH intake (~5 million ETH) was paid out to just ~7k ‘big winners’ (less than 1% of participants)” assuming each of these addresses truly represents a single PlusToken participant.

This unusually high concentration of payouts in no ways implied an...