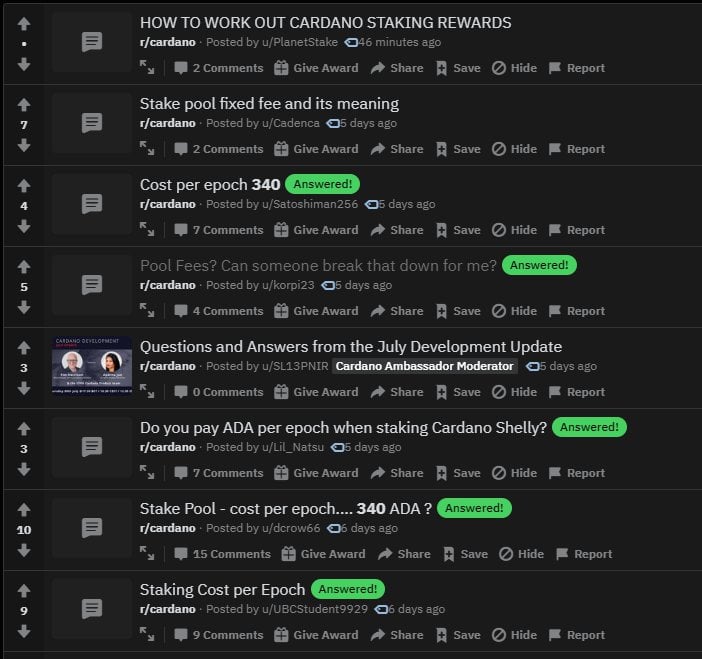 You’ve finally decided to delegate your ADA (what took you so long, anyway?) You fire up Daedalus in the search for the perfect pool and you notice that all pools have some sort of costs associated with them: “Pool margin” and “Cost per epoch”. What’s up with that?

Do you need to pay 340 ADA each 5 days in order to delegate to a pool? No, of course not. You don’t have to pay anything (except some one-time minimal transaction fees).

I know, the terms can be confusing. Don’t worry, you’re not the only one who got confused by the whole cost issue. Here’s a recent snapshot from Reddit:

Let me walk you through a typical scenario so you can have a better understanding of the whole process.

Step 1. You find a pool to delegate your ADA. Click, click, next, next, enter spending password, next, continue and poof, you pay ~2.17 ADA and you’re delgated. Why 2.17 ADA? I won’t bore you with the details but some transactions are required behind the scenes for you to be able to delegate. The good news is that if you decide to delegate to another pool, you’ll only pay a ~0.17 ADA transaction fee. That’s it. No more taxes. You’re all set.

Step 2. Epochs go by and your pool starts minting blocks. This is good! You’ll get rewards. For the sake of simplicity we’re going to ignore the treasury tax. Let’s assume that 1 block = 1000 ADA. Cost per epoch = 340 Pool margin = 5% Pool mints 10 blocks