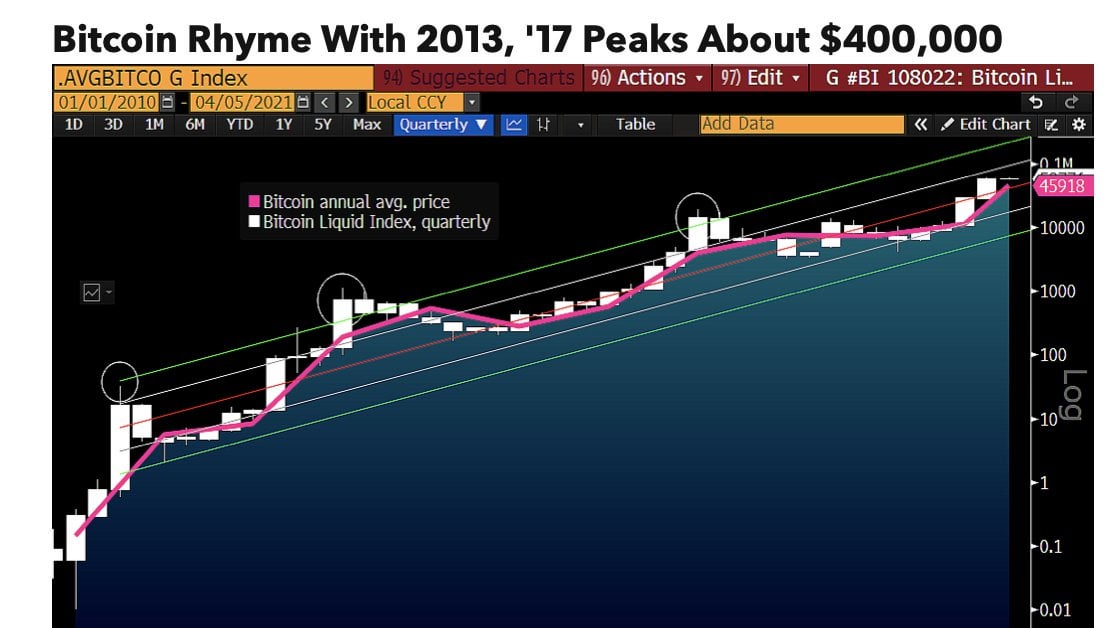 How high can bitcoin fly in the ongoing bull run? That’s a question on traders’ minds after the cryptocurrency’s price jumped fivefold since October.

According to Bloomberg bitcoin (BTC) analysts, the price could climb as high as $400,000 this year, from about $56,000 now. The uber-bullish prediction is based on bitcoin’s performance during the 2017 and 2013 bull runs.

“Our graphic depicts bitcoin on similar ground as the roughly 55x gain in 2013 and 15x in 2017,” Bloomberg Crypto noted in a monthly report published this week. “To reach price extremes akin to those years in 2021, the crypto would approach $400,000, based on the regression since the 2011 high.”

While past performance is no guarantee of future results, history might rhyme. The latest bull run comes in the wake of last May’s reward halving on the Bitcoin blockchain – an automatic, every-four-years, 50% reduction in the pace of new issuance of units of the cryptocurrency.

Bitcoin chalked up staggering gains in the 12 to 18 months following the previous reward halvings in November 2012 and July 2016.

“The year after a supply cut (halving) is what 2021 has in common with 2017 and 2013, along with subdued volatility,” the Bloomberg bitcoin analysts wrote, adding that the December 2017 peak represented a 50-fold rise from the average price observed in October 2015, when the 180-day volatility reached lifetime lows.

Some observers fear a faster rise in bond yields could dilute the appeal of inflation hedges such as gold and bitcoin, pushing their prices lower.

“Rising real yields are a headwind for gold prices, but less so for bitcoin, still in its price-discovery stage,” analysts noted. “Gold is figh...

The HODL meme transcends digital jokery and insulates Bitcoiners through the power of community belief.
19
Share