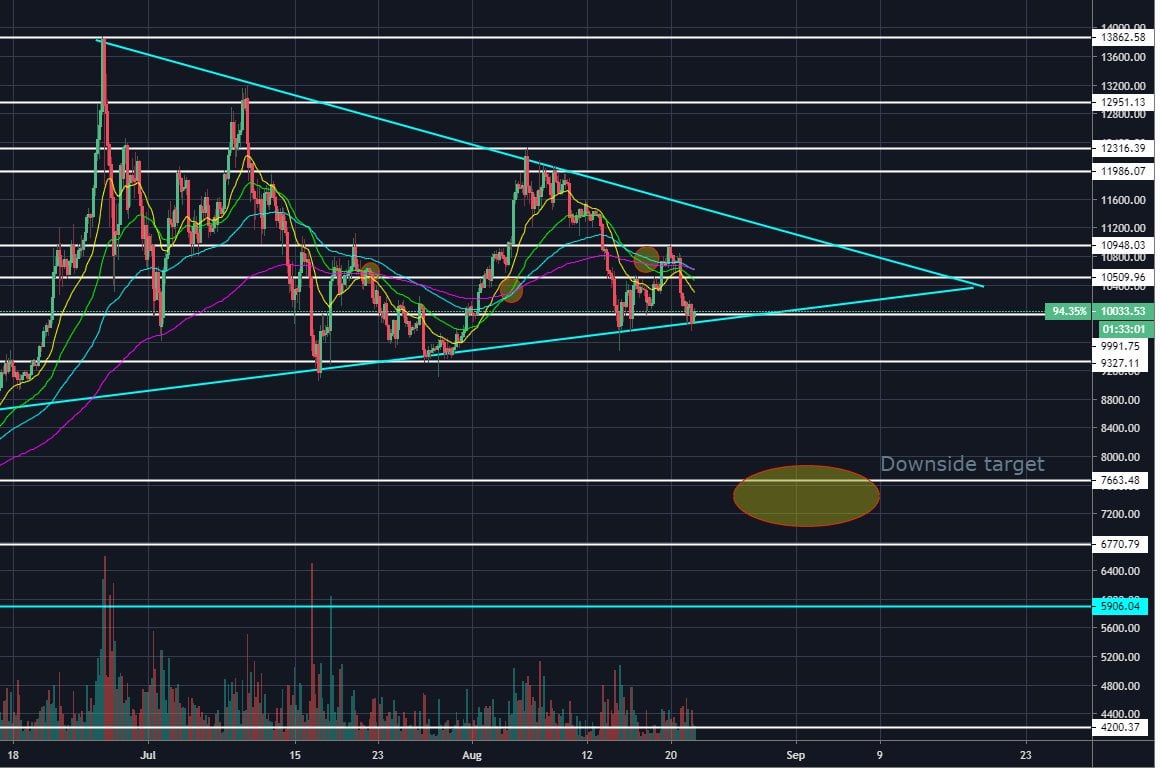 Bitcoin on the brink of major 25% correction - Coin Rivet

Bitcoin looks primed for a major move to the downside following a two-month period of consolidation above $10,000.

The world’s largest cryptocurrency is on the brink of breaking a major level of support which is in confluence with the lower side of a symmetrical triangle and the 100 EMA on the daily chart.

Bitcoin failed to avoid a fourth lower high in two months on Monday, falling by 10% after being rejected from the $10,950 level of resistance.

BTC is now sitting precariously above the $9,850 level of support. A four-hour or daily candle close below that level would present a new bearish phase in the market, with downside targets coming in at $8,250 and $7,350.

The daily 200 EMA is currently at the $8,250 mark, which looks like a key profit-taking level for seasoned digital asset traders.

$BTCUSD really on the ropes here. Needs a bounce to avoid a break of the triangle to the downside. pic.twitter.com/KAKUSKpP8j — Oliver Knight (@KnightCoinRivet) August 22, 2019

The 50 EMA on the weekly chart was used as a bitter point of resistance throughout the bear market in 2018 as well as before the breakout to $14,000 earlier this year. This could be a key level of support if a breakdown plays out as it lies in confluence with the $7,650 level.

The weekly and daily relative strength indices (RSI) are also ticking to the downside, showing signs of bullish exhaustion following a 350% rally to the upside from March to June.

Although the outlook for the coming weeks looks rather bleak, there is a slight bullish case for Bitcoin. If it can bounce from the lower side of the symmetrical triangle to above $10,950, price could potentially break out to the upper side of the triangle. A breakout from this point could well result in a retest of yearly highs at $14,000.