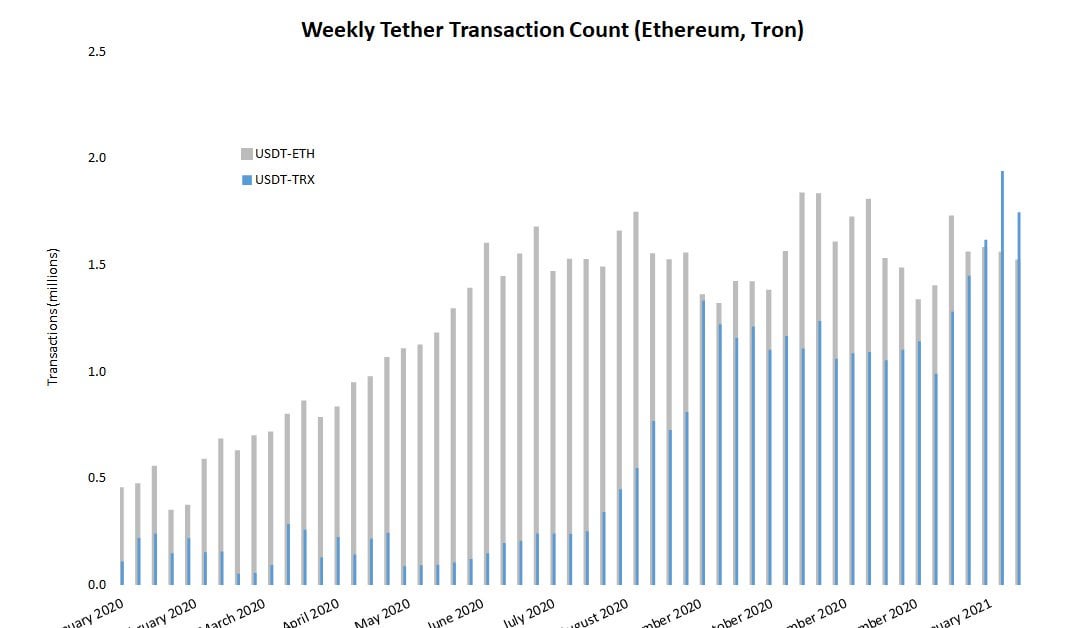 The number of tether transactions on the Tron blockchain have passed Ethereum’s count for three consecutive weeks as fees on the number two blockchain remain high.

Total weekly tether transactions on Ethereum have held steady at around 1.5 million for the past four weeks. But on Tron, transactions per week have grown from roughly 900,000 in mid December to nearly 2 million the second week in January, per Coin Metrics data.

This recent trend is “primarily because of fees,” said Coin Metrics analyst Nate Maddrey in a message to CoinDesk.

Priced in dollars, the average fee for an Ethereum transaction set a record high of above $19 a week ago, but now sits just below $8. Priced in ether, the average fee is well below all-time highs but still rather large, surpassing 0.015 ETH multiple times this month, per data from Blockchair.

“As fees go up, [tether] transactions tend to shift from Ethereum to Tron,” Maddrey said.

“Lately, given the increased cost of Ethereum transactions, it would be logical to use Tron,” said Tether CTO Paolo Ardoino, noting the newer blockchain also has “good adoption across crypto exchanges” and is “extremely cheap compared to Ethereum.”

Tron isn’t the only alternative for tether users. In the past two years, Tether has also launched on Algorand, Solana and Liquid Network with plans for even more integrations, Ardoino said. But which network claims the largest share of Tether transactions is still somewhat of an open question.

Tether transactions skewing heavily toward just one or two blockchains wouldn’t be surprising, Maddrey told CoinDesk. But the distribution of use depends on “a combination of low fees, network eff...