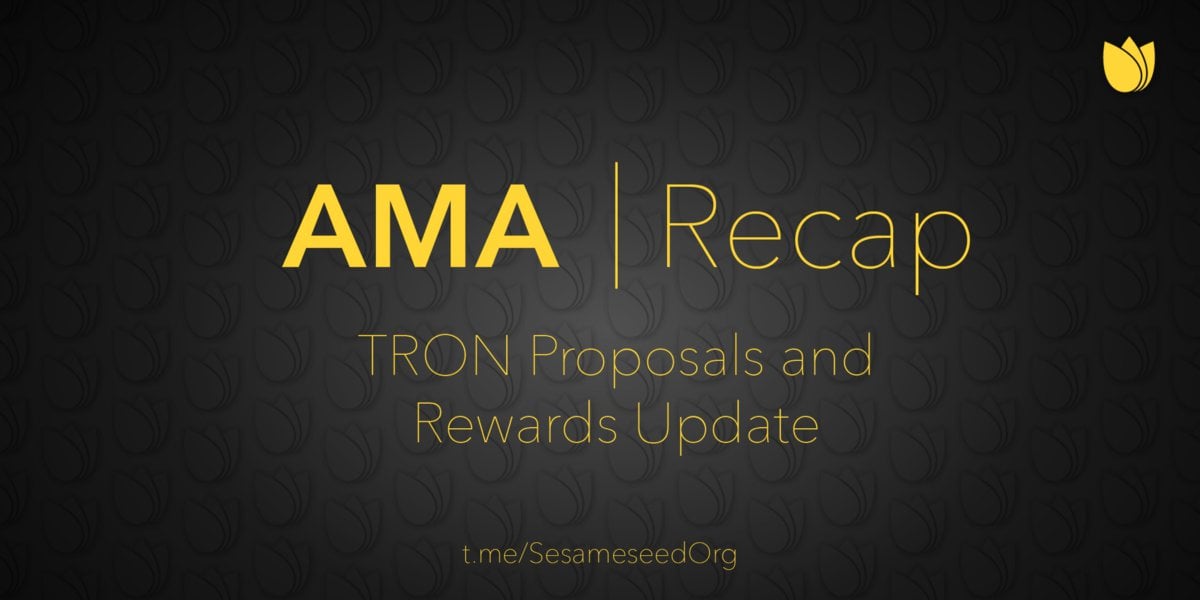 Learn all about the latest TRON proposals and how they affect the ecosystem and rewards from our latest AMA recap.

On November 8th Sesameseed hosted an AMA on Telegram to review the latest approved TRON proposals — Proposal 22 and Proposal 27 — and answer community questions. Present were Juliun Brabon CEO of Sesameseed and Humpty Calderon Head of Marketing at Sesameseed.

Below is a summary of the questions and answers from the event.

TRON Proposals are just parameters on the TRON Blockchain that are designed to be modified by the Governance System of TRON. These could be anything from activating specific features to setting values for rewards, etc.

How are Proposals created?

Proposals are created by TRON Foundation itself via an upgrade to its node software, JavaTron. Once created, any Super Representative can initiate voting on a proposal.

What purpose do Proposals serve?

These Proposals serve the purpose of allowing for real time fine tuning of the TRON Blockchain itself by consensus. It’s the means by which Super Representatives (SRs) determine the way specific aspects of the blockchain operate.

How have Proposals been initiated in the past?

In the past Proposals have been initiated in several ways. Some SRs have drafted letters to their communities, held polls with other SRs or outlined basic justification in an open forum for voting for a specific Proposal. Alternatively, TRON has initiated many Proposals in the past.

How does voting for a Proposal work?

Voting is conducted entirely at the discretion of the individual SR, but often the initiator of a Proposal will ask or campaign for votes for other SRs or provide justification for the reasoning behind their proposal.

In the case of TRON themselves, there is often less information provided when they initiate a Proposal from any of their SRs. In addition, they may have differing motivations from other SRs and so still need to campaign for votes. Continue on medium.com