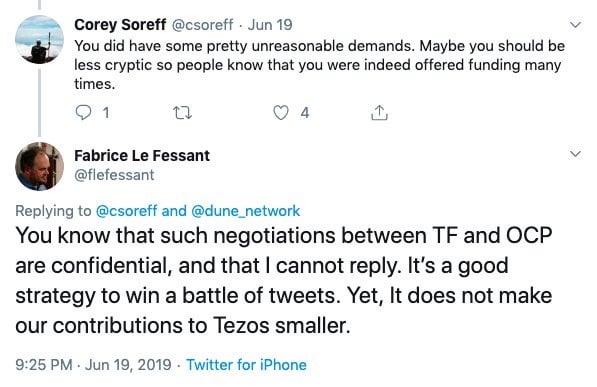 A year as a Tezos Foundation Board Member, an article by Diego Pons

As a comparison, when the Foundation’s board resigned, each member received a severance of 400,000 USD, after doing nothing for six months. Fabrice Le Fessant, From Tezos To Dune Network, September 3rd 2019

Being said board member, I guess Fabrice is asking for me to answer. I also noticed other executives in Origin Labs have explicitly requested a statement from the parties in question.

The resignation of the board of Tezos

I don’t really understand the Dune leadership’s obsession with Twitter and Reddit flamewars… that is not how proper businesses behave. While Dune Network positions itself as the blockchain for businesses, its management behaves in a way that would dissuade any reasonable business from working with them. I once met a man that loved public arguments, grandiose declarations, and borderline xenophobic statements: Johann Gevers. Unsurprisingly, the Swiss authorities and other significant stakeholders in the Swiss CryptoValley were not amused.

On February 22nd 2018, Johann Gevers and I (Diego Olivier Fernandez Pons) “voluntarily” resigned from the board of the Tezos Foundation. And while we did receive a compensation as reminded by Fabrice Le Fessant, I am afraid most of the statements otherwise made in “From Tezos To Dune Network” are imprecise when they are not false.

Where You Can Spend Your Bitcoin in 2020