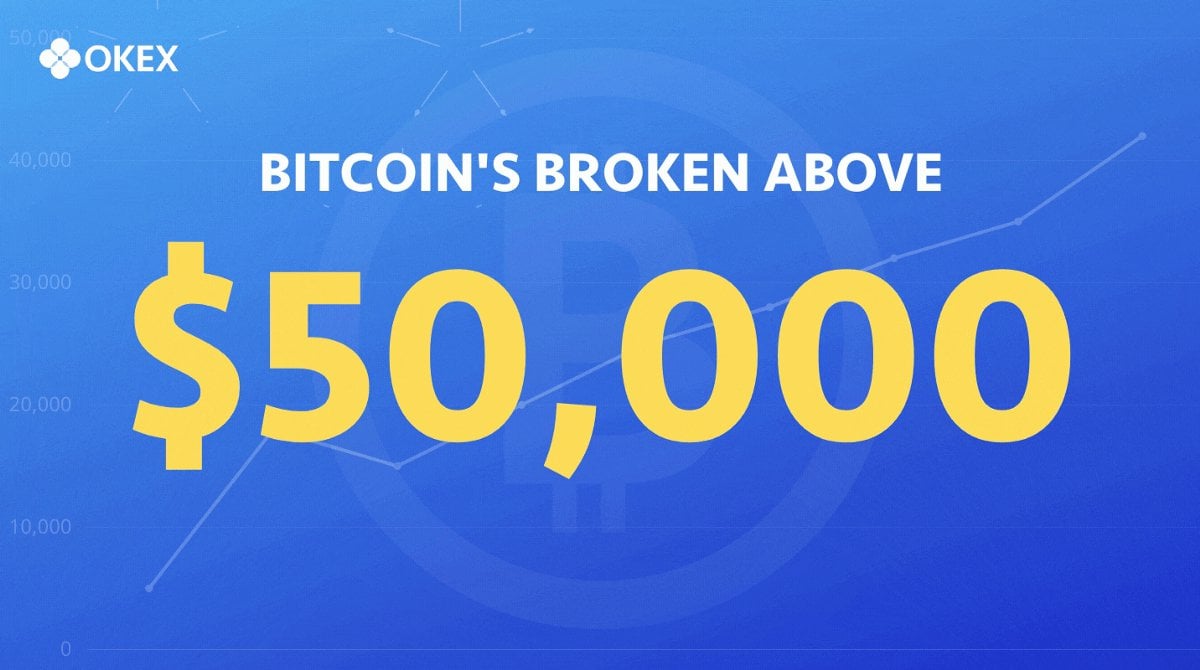 There seems to be no stopping Bitcoin, as not only did it break the $50K support lines, but it passed it hitting $51,236 as of this morning.

The good news keeps flowing when it comes to Bitcoin. It is on a non-stop tear, blowing past the high $40’s to top $50K today. This firm position strengthens it’s poise to grow up to $60K, where if this trend continues it could hit new support levels where the new battle ground will take place.

The broader cryptocurrency market is still extremely greedy, as per a multifactorial crypto market sentiment analysis from Alternative, which analyzes emotions and sentiments from different sources and crunches them into one simple number: The Fear & Greed Index for Bitcoin and other large cryptocurrencies.

BTCUSDT on OKEx has successfully broken out of the ascending wedge pattern previously mentioned. However, it resolved in a bullish fashion, thanks to strong support from buyers. The price action has pushed BTC above the $50,000 milestone, with many traders now setting their sights on higher prices.

ETH has stalled a bit not able yet to reach $2K, where there is a struggle to hit this target. Once it’s reached, this could indicate a strong sentiment to push higher, but it’s become difficult for ETH to get there so far. ETHBTC on OKEx remains bearish while trapped underneath a key level of resistance and the four-hour EMA ribbon.

Overall though, this entire bull run has brought up several other cryptocurrencies which are doing well recently. As of this writing, Litecoin is up 8.56%, XRP is up 4.02%, and Bitcoin Cash is up 1.68%. The Bitcoin fork BCH, which aims to be an upgraded version of Bitcoin, has shown a lot of emotional sentiment and network activity over the past week, where the total number of transactions per day has surpassed that of Bitcoin (BTC) and hitting a high mark of $762....

Is Okex mining pool dead? - I wanna mine ETH on my GPU but can't find any recommended software to do so

Is Okex mining pool dead? - I wanna mine ETH on my GPU but can't find any recommended software to do so

Following the suspension of withdrawals from trading accounts, hash power dropped by as much as 99% on OKEx's digital currency mining pools.
1
Share