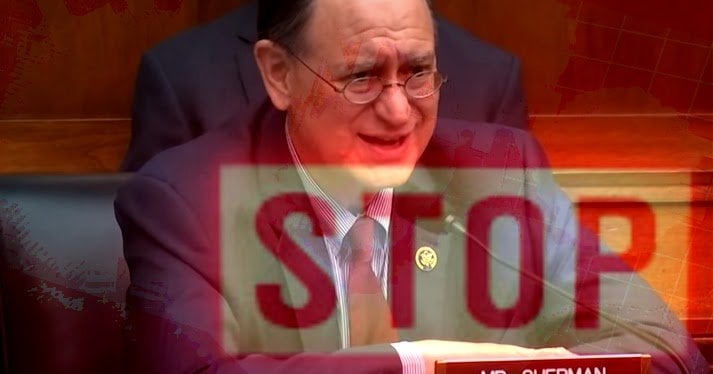 The Dirty History of the Congressman Who Wants To Ban Crypto - And How YOU Can Help Shut Him Down... (We NEED YOU!)

When I hear someone claiming to 'work for the people' aiming to control what those people can do with their own money, it immediately sets off some red flags.

There's no way to give someone wanting to ban cryptocurrencies the 'benefit of the doubt' - because even if he really means what he's saying,  he doesn't stop there. Instead, he's willing to force everyone to follow laws based on his opinion.  Stripping away people's power to make their own decisions, in his mind, is justified when he thinks it's for the best.

If he simply shared his opinions, I would have no problem with him, he would just be wrong.  The problem is his desire to enforce his opinions with laws.

Unfortunately - it gets so much worse the deeper you look.

I'll be honest, because it's a bit amusing - I spent a lot of time digging for info on Congressman Sherman.

Last year I was all riled up and angry the first time he expressed his ideas on a crypocurrency ban, so I read a lot about his background, where his funding comes from, sent a few e-mails to sources, and gathered a good amount of notes in preparation to turn them into an article.

As some of you reading this know, prior roles in the media allowed me to build some contacts within Congress which I've used for several stories in the past.  Then I guess I just got distracted with something... I don't remember what, it happens easy in the crypto world, things move fast - but I never got around to writing that article.

So the amusing part is, today Mr. Sherman was kind enough to remind me when he said it again.

For anyone who thinks he's speaking from the heart, and all this is simply out of concern.  Look into his associations, donations to his campaign specifically - personally, i'm ruling that out.

Let's take a hard look at who we're dealing with, and below I will show what you can do to take action in 30 seconds or less!

FOR THE PEOPLE, OR COMPANIES FUND HIM?