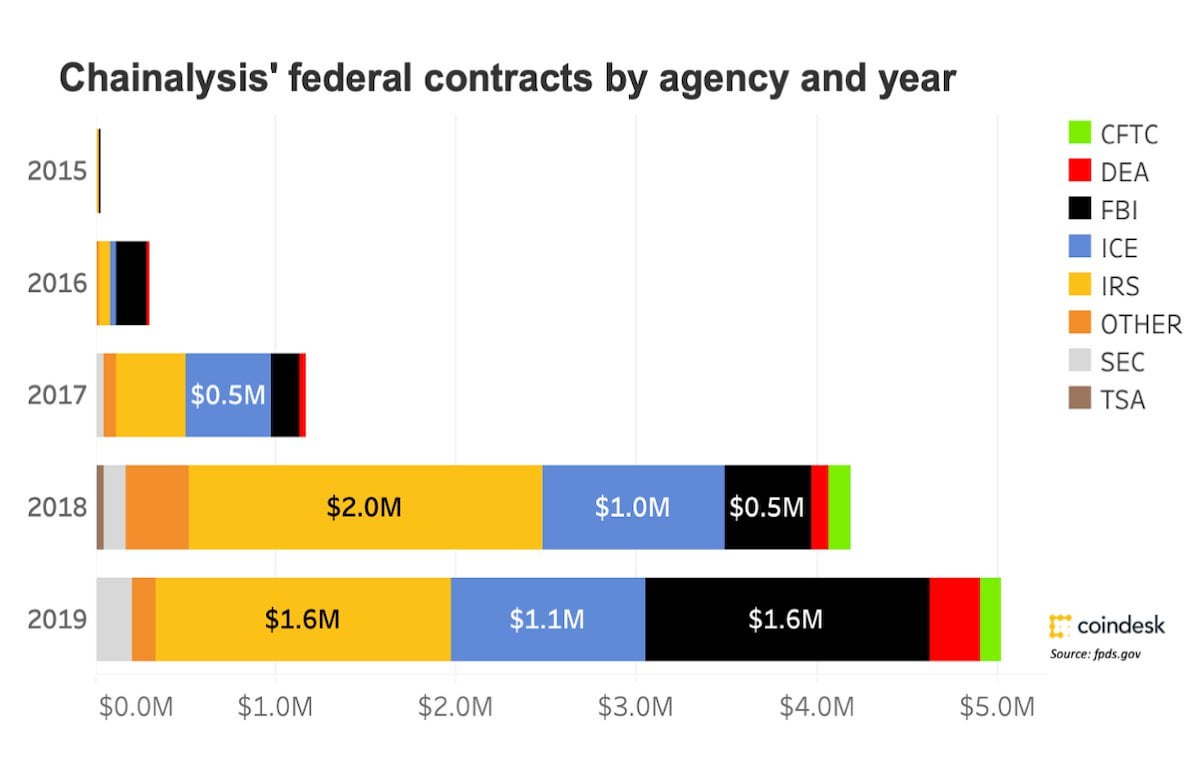 Inside Chainalysis’ Multimillion-Dollar Relationship With the US Government - CoinDesk

But just five years later, Chainalysis is now the cryptocurrency-tracing equivalent of Palantir, the data analytics company flush with lucrative government software contracts. Chainalysis is, right now, doing millions of dollars worth of business each year with the U.S. government, dwarfing its competitors in the young industry of blockchain surveillance.

The company is by far Uncle Sam’s leading crypto analysis contractor by spending and has become the go-to firm for 10 federal agencies, departments and bureaus.

In short, the feds want to catch up on, and make sense of, the tangled transactional web of bitcoin and other cryptocurrencies to stop all sorts of crimes – and they’ll spend big to do it.

Federal agencies have spent at least $10 million ($10,690,706 to be precise) in American tax dollars on Chainalysis’ tools, services and training since 2015, when Chainalysis was founded, according to 82 records of federal procurement contracts reviewed by CoinDesk. Counting contracts with possible extensions, the company stands to take in more than $14 million.

No competing firm’s federal contracts match Chainalysis', and none are as prevalent across agencies. CipherTrace, led by CEO David Jevans, has made about $6 million through mostly research and development contracts; Elliptic, a British firm, has had only one contract worth $2,450 with the Internal Revenue Service, according to federal data.

Chainalysis’ contracts open a small but prescient window into the federal government’s nascent relationship with the cryptocurrencies some use to evade detection. Bitcoin is a pseudonymous system with inherent traceability – a network moving billions of dollars in value on a public ledger that anyone can track.

And though Chainalysis data show only 1.1 percent of bitcoin transactions were illicit in 2019, that proportion is growing: up 180 percent over the ...