IOTA is rdy for Quantum computing... and it's coming sooner than you think!!

Intel on Tuesday said it's delivering a chip for quantum computing — an approach that's vastly different from the one PCs, phones and other devices have used for decades — to a European research group. The move demonstrates progress on the chipmaker's part in an area that could be pivotal to its future.

While classical computing encodes information in bits represented by ones and zeroes, quantum computing works with quantum bits, or qubits, which can be ones and zeroes at the same time. That quality, researchers believe, could make quantum computing perform certain tasks much faster than current computers can, like drug discovery and materials science research. But today's quantum chips often require very cold temperatures and only work for short bursts of time.

Intel has previously produced quantum chips for testing, but the new quarter-sized 17-qubit superconducting test chip is the first one the company is discussing publicly since announcing its $50 million partnership with QuTech — a research institute that involves the Netherlands' Delft University of Technology and Dutch Organisation for Applied Research — two years ago. One reason is the new system includes special packaging that can make the chips for longer stretches of time.

"The design improves reliability and thermal performance, as well as reducing radio frequency interference," Jim Held, the director of emerging technologies research at Intel Labs, told CNBC in an interview.

It makes sense that Intel is opening up now about the state of its quantum program, given that in recent months Google, IBM and Microsoft have all shown off their quantum chips. (IBM's latest chip also has 17 qubits. Having that number means QuTech... 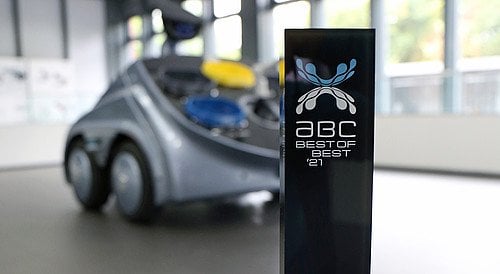 The ABC Award is the established premium accolade when it comes to pioneering concepts and products for the mobility of tomorrow. New demands on quality of life and sustainability are changing the way...