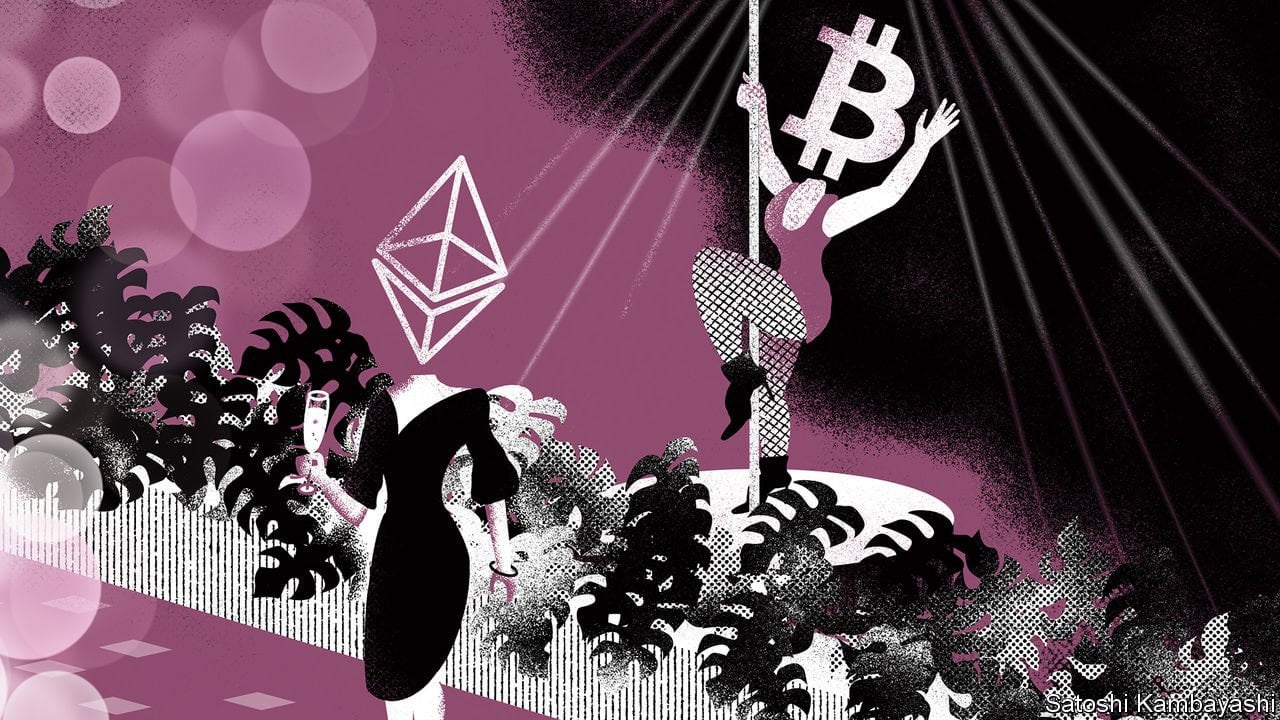 What springs to mind when you hear the words “crypto rave in Colombia”? Perhaps an image of sweaty programmers swaying out of sync to thumping house music, some boorishly shouting over it to discuss the latest crypto-token they are flogging, their enthusiasm amplified by illicit substances. Given the crypto community’s penchant for spectacular hacks, rug-pulls and general calamity, something, somewhere is surely going dangerously awry. However the reality, as your columnist discovered on October 12th, is a little different.

Listen to this story. Enjoy more audio and podcasts on iOS or Android. Your browser does not support the <audio> element. Save time by listening to our audio articles as you multitask OK

The rave—or “raave” as it was marketed to partygoers—she attended was thrown by Stani Kulechov, the founder of Aave, an open-source protocol through which people are able to lend or borrow various cryptocurrencies. The protocol is one of the more successful decentralised-finance (DeFi) applications. Mr Kulechov hails from Finland and the word “aave” is Finnish for “ghost”, which is the protocol’s logo.

He throws a chic party. The raave was held on the sidelines of Devcon, an annual conference hosted by the Ethereum Foundation, a non-profit organisation that brings together developers working on Ethereum, the second-most valuable blockchain. This year the conference was in Bogotá, the capital of Colombia. The party took place in a converted warehouse filled with plants to evoke a jungle theme. The bar served spicy mezcalitas. Veronika Fleyta, a British dj, manned the decks. The toilets worked. There were even taxis waiting outside to take tired raavers to bed.

Far from being rammed with nerds, the crowd was a mixed bunch. Attendees included a Colombian girl who had participated in a hackathon before the conference kicked off, a French programmer who was working on a method to distribute aid via Ethereum and a cheerful Mexican guy waiting in line for a raave t-shirt, emblazoned with a “friendly ghost” logo in headphones. None of them tried to shill tokens.

It was a grown-up event—one which reflects a newfound maturity among a community more commonly known as anything but. Aave is a five-year-old company with a successful project it has spun off to be run by the community, through what is known as a “decentralised autonomous organisation” (or “dao”). Its founder is working on his next venture, a social-media protocol called “lens”, which will allow users to “own” their followers, taking them from one social-media application to the next, and thus switch apps without losing clout.

The party is not the only evidence crypto is a more mature industry now. Despite prices plunging into another so-called “crypto winter”, the market capitalisation of all tokens is still around $1trn, the same as in early 2020. Slumps no longer lead to questions about whether the end is nigh. At Devcon several firms announced that, despite the crash, they had raised capital from venture firms. UniSwap Labs, founded by the creator of UniSwap, another successful DeFi protocol, raised $165m at a $1.7bn valuation. Established venture-capital firms, like Andreessen Horowitz, which participated in the fundraising round, are sticking with crypto.

Perhaps this is a reflection of the fact that the tech is getting better, too. Devcon came on the heels of “the merge”, when Ethereum switched the mechanism by which it adds data to its blockchain. The change essentially eliminated Ethereum’s carbon footprint overnight. The next technological improvements are likely to increase the scale and reduce the cost of transactions, which should make Ethereum useful for more than just financial applications.

Still, it would be unwise to assume that a pocket of maturity reflects the entire crypto community. A few days before Devcon, during a visit to Miami, your columnist considered attending another crypto party—this one favoured by bitcoin bros. It would have been in a nightclub in Wynwood, a neighbourhood filled with pastel-coloured buildings and crypto firms. The area is home to the headquarters of Blockchain.com, a crypto-trading platform, and will soon host the American base of ftx, an exchange run by Sam Bankman-Fried, a well-known crypto billionaire. First, though, she checked it was a good idea with the crowd who had gathered for a weekly bitcoin brunch at a Haitian restaurant. “Erm...that is actually a strip club,” one of them sheepishly replied—a step too far, even for a journalist willing to brave a crypto rave.

Read more from Buttonwood, our columnist on financial markets: Can Britain escape the “moron risk premium”? (Oct 20th) Credit-default swaps are an unfairly maligned derivative (Oct 13th) The world’s most important financial market is not fit for purpose (Oct 6th)

For more expert analysis of the biggest stories in economics, finance and markets, sign up to Money Talks, our weekly subscriber-only newsletter.

2H Ago
MetaMask Now Collects Users’ IP and ETH Address after a Transaction
Ethereum
fuckedweb3.com
10H Ago
Annotated Ethereum Roadmap: Merged, Surge, Scourge, Verge, Purge, Splurge
# Annotated Ethereum Roadmap This document aims to as an entry point for the various items on [the
Ethereum
notes.ethereum.org
11H Ago
Web3 Gaming Sucks: The Struggle With User Experience
Surveys on Web3 gaming show that a lack of interest and understanding prevents further adoption, and they may be too boring.
Ethereum
beincrypto.com
1D Ago
Collaborative canvas on Eth. Join costs small amount, then painting is free + gas.
Ethereum
ruinedcanvas.com