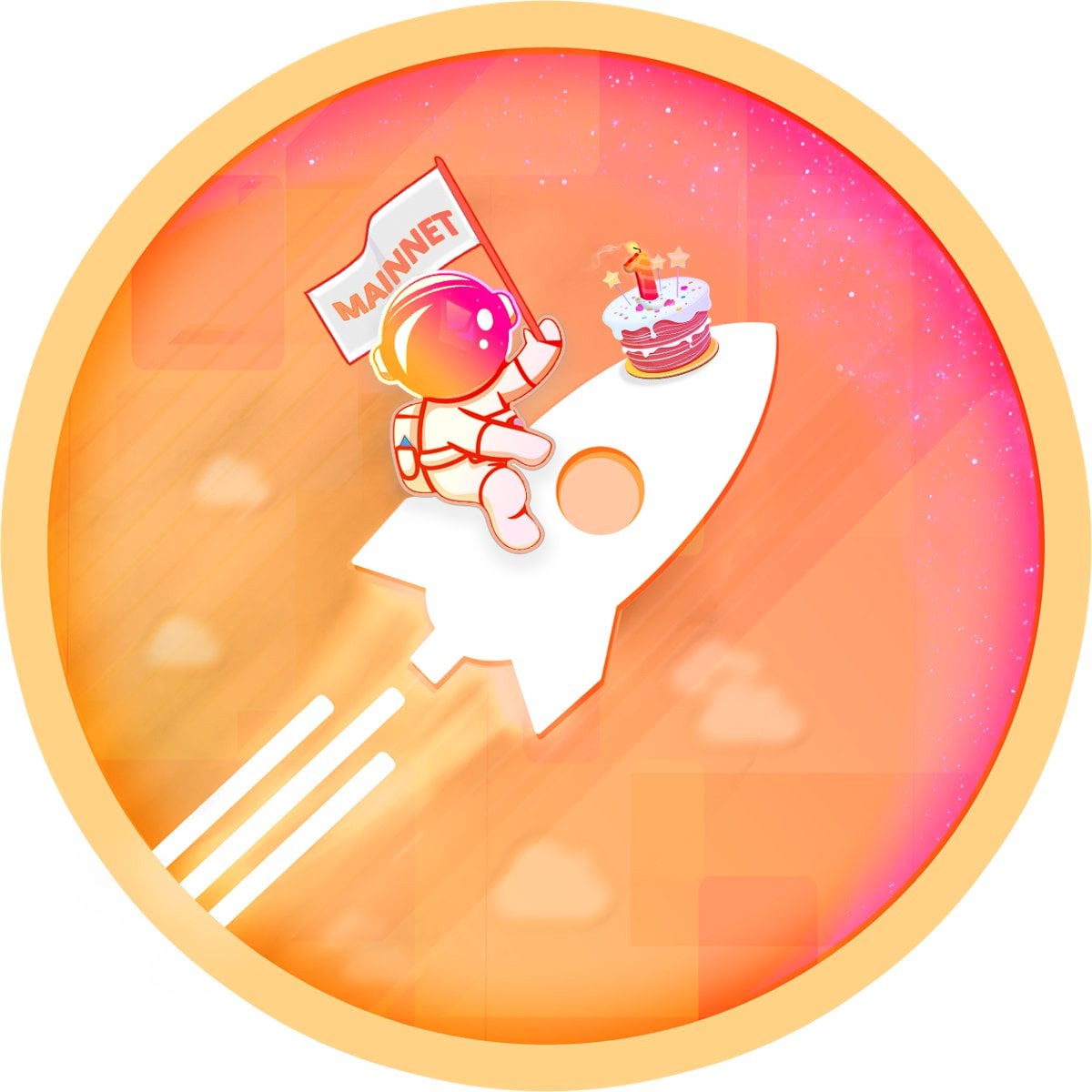 Hello Rocket Poolers! Today we are celebrating our first mainnet birthday! For such a momentous occasion, we thought we’d take a step back and look at all that’s happened in this first amazing year.

After doing a few betas, then more betas, another beta and then one “last beta we promise™️”, we finally made the leap to mainnet 1 year ago and endured the presage of challenges that mainnet would bring. It’s been a journey and one that we’re extremely proud to have undertaken alongside our great community and all others who’ve helped decentralised staking become a real option against a multitude of centralised choices.

To celebrate this, we’re going to try to cram in as much as we can in this article to recap all things Rocket Pool in its first year on mainnet.

As of now, The Ethereum Foundation recognises Rocket Pool as officially battle tested, making it the only staking option to get green ticks across the board for all criteria they specify as important for a staking provider.

We are extremely pleased to finally meet the final criteria after our first year on mainnet and look forward to continue to build on it going forward.

Growth Rocket Pool has had the fastest growing LSD (rETH) since the merge! Source: Messari

While we always hoped Rocket Pool would do well as the first decentralised staking option for Ethereum, we have been humbled by its reception since launch and even more so, since the switch to full proof of stake (aka The Merge) in September.

Before we get too far ahead of ourselves though, let’s do a quick recap on the growth of Rocket Pool from the beginning. There are many facets to the protocol, so we’ll look at the growth of rETH our LSD (Liquid Staking Derivative), the protocol’s decentralised network of node operators and our TVL (total value locked) which provides a thousand foot overview of the value behind the protocol.

We first wrote about liquid staking way back in 2019, since then the landscape has evolved to see several of these LSDs come to market.

rETH is the LSD token of our protocol. rETH represents an equal amount of ETH deposited into the protocol plus an equivalent share of the ETH staking rewards accrued by the node operators in the protocol. While the balance of owned rETH will remain constant, the balance of ETH backing the token in the Rocket Pool protocol continues to increase. It can also be traded back to the protocol for ETH at any time, providing liquidity is available.

rETH growth has been fantastic since launch. Its growth is often highly correlated with the number of node operators in our decentralised network and the amount of capacity they can provide in terms of validators. At the moment each node operator is required to stake 16 ETH themselves per minipool (our validators), this enables them to stake 16 ETH on behalf of the protocol, or in other words, the ETH traded for rETH by liquid staking users.

With our next release Atlas due in Q1 next year, we will be introducing LEBs, or Low Ether Balance minipools. These will require the node operator to put up just 8 ETH and receive 24 ETH from the protocol enabling growth of rETH to be accelerated even more due to the extra staking capacity available per minipool. All current node operators will also be able to upgrade their 16 ETH minipools to two 8 ETH minipools, essentially tripling our overall capacity of Rocket Pool to mint rETH near instantly.

It is hoped we will be able to introduce 4 ETH minipools in the near future with a release following Atlas, more on that to come later.

The backbone of the Rocket Pool protocol are the node operators. Simply speaking, we make running a node and staking on Ethereum a really easy process. This we hope is shown in how many node operators are currently operating on the protocol and the near constant rate that they have been joining since we launched.

Currently the Rocket Pool network consists of approx 1,700 node operators in over 101 regions!

Rocket Pool currently has a network of around 1,700 node operators, this is more than some competing layer 1 protocols. Our node operators are also incredibly diverse with them being spread over 101 timezones. You can view the current status of the protocol here on our network map.

If you’re curious about running a node, we highly recommend taking a deep dive into our docs. From hobbyist node operators to full on SaaS professionals, Rocket Pool caters to all and allows you to earn a greater ROI staking inside the protocol vs outside of it as a node operator.

Rocket Pool allows node operators to stake ETH and also RPL as insurance collateral. The growth of the protocol in the first year has seen almost 300,000 ETH staked (2% of all Ethereum staked) and over 7,600,000 RPL staked.

Node operators in the Rocket Pool protocol are required to stake RPL as an insurance promise to the protocol that they will be a good node operator, if they are not and incur serious penalties, then their RPL stake is penalised and the protocol is made whole to protect the value of rETH.

RPL has a rate of 5% inflation and currently has a circulating supply of 18,900,000. Approximately 40% of all RPL is currently locked inside the protocol in under 12 months as this insurance collateral for the staked ETH.

The first major upgrade to Rocket Pool occurred a few weeks prior to The Merge ™️ in September, it was titled Redstone and made the protocol compatible with the merge and also introduced several new highly desired features.

One final exciting new feature of the Redstone update is the Smoothing Pool. After The Merge ™️ occurred, block proposals now include priority fees. Getting these proposals isn’t always easy though, especially if you just run a single minipool validator.

The new Smoothing Pool is an opt-in feature that will collectively pool the priority fees of every member opted into it. This is a way to effectively eliminate the randomness associated with block proposals on the Beacon Chain. Neat!

Node operators who stake RPL are also rewarded every 28 days from the protocol for providing this collateral insurance and backing the value of rETH against any extreme validator slashing scenarios.

The RPL rewards system has now had a complete overhaul. The way node operators receive their RPL rewards is now much more flexible and gas efficient. Before Redstone you would have to make an onchain claim every 28 days which can be costly depending on how busy the Ethereum network is at the moment the claim is made.

With the new rewards system, claiming one rewards interval is 8x more efficient than the current system and claiming ten intervals is 40x! It is also significantly more flexible. Save a year’s worth and claim all at once when gas is super low? No problem. Claim every period just like you do now? Also no problem.

After The Merge ™️ occured, smart node operators and their minipool validators are now responsible for creating blocks and in doing so, they have begun receiving priority fees (also known as tips) which are attached to each transaction. This new distributor makes sure these fees are split between the node operator and rETH liquid staking users, just like Beacon Chain rewards now.

But how does this work? Rocket Pool is designed to fairly distribute these rewards, the same way it fairly distributes your Beacon chain rewards: half of any priority fees your minipool validators earn will go to you (plus the average commission of all of your minipools), and the other half will go to the pool stakers (minus your average commission).

When you deposit ETH and receive rETH, it was previously locked from being transferred for 24hrs. This was done as a security measure to prevent sandwiching attacks.

With Redstone however, that 24hr lock was removed, instead when you trade rETH for ETH, a single day’s worth of rewards subtracted from the total trade amount which prevents sandwiching attacks. On top, this also better supports 3rd party integrations where rETH is minted.

If you wish to run a node in Rocket Pool, chances are pretty high you’re using our smart node stack. This is a super easy way to become a node operator as it comes bundled with everything you need to be a certified Ethereum node staker.

Since launching a year ago, we’ve released a whopping 25 new versions of the smart node stack. Updates vary greatly from a release that might just contain some important execution layer client (Geth etc) or consensus client updates, to much bigger releases which make the stack compatible with Ethereum hardforks such as the merge.

Select and run your Execution and Consensus clients easily!

A few of the notable updates to the smart node stack in our first year include:

Over the last year, our community governance has been marching forward, with the release of pDAO phase 0. Dedicated and passionate community members have discussed proposals, drafted Rocket Pool Improvements, raised Snapshot votes, conducted research and analysis, and formed committees for managing incentives and a grant program. We are very proud of the community that has formed around Rocket Pool.

Well 9.25 points to you for making it this far! If you have questions, feedback, bug reports or want to know a bit more about us, why not swing by for a chat and say G’day! You can view our website or have a chat with us in our Discord chat room that anyone can join. If chat rooms aren’t your thing, we’re also on Twitter!

Rocket Pool is Ethereum’s most decentralised liquid staking protocol. Its 1,700+ worldwide node operators have staked over 295,000 ETH representing over 2% of all Ethereum staked.

Liquid stakers can participate by depositing as little as 0.01 ETH to receive the rETH liquid staking token. Rocket Pool is a fully non-custodial solution, and its node operators are economically-aligned to perform well for stakers.

Joining as a node operator is fully permissionless and requires just 16 ETH (instead 32). A boosted ROI is provided from both operator commission plus RPL rewards. For more information check out our node operator guide.

The Rocket Pool team have been in the staking space since its inception in 2016, which gives them a pedigree and track record without peer.

2H Ago
What are your thoughts on Apollo making the creator contests free to vote for instead of voting with coins?
...
Ethereum
apollocreators.com
4H Ago
Coinbase parent Ethereum ERC-20 company Circle branches out to Defi in own-Decentralised exchange offering, causes controversy by only supporting own stablecoin USDC on the platform "for long term security and stability reasons, alongside more streamlined liquidity"
USDC is available on Algorand, a leading smart contract development platform. Learn about USDC on Algorand today!
Ethereum
circledex.io
1D Ago
Get in line…Binance is bailing your failed project out
Ethereum
fuckedweb3.com
1D Ago
Ethereum keystore - what is in it?
Ethereum
yurichev.org