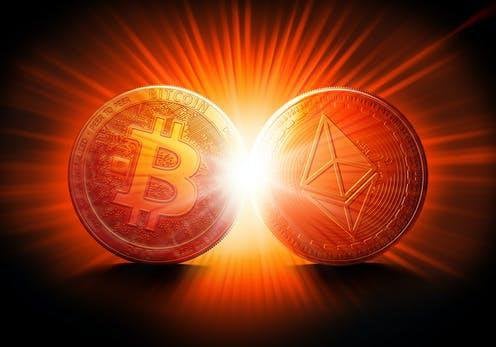 The world’s second most valuable cryptocurrency, ether, has been touching all-time highs in price ahead of a major upgrade of its underlying platform, ethereum. Ether is currently worth in aggregate just shy of US$500 billion (£363 billion). That’s still slightly less than half that of the biggest cryptocurrency, bitcoin.

But could this upgrade, a vital step towards a much greener and faster version of the current system, put ethereum on the path to becoming the dominant platform on the internet and make ether number one?

First of all, it’s important to understand the difference between bitcoin and ethereum. Bitcoin is a system for allowing people to send value between one another without the need for banks. It is built on a technology known as blockchains, which are online ledgers whose transactions are checked and recorded by a decentralised network of computers known as validators.

These validators are incentivised for their work by receiving newly minted bitcoin as rewards, in what is known as “mining”. To make this more attractive, bitcoin is relatively scarce: only around 18 million coins are in existence and the protocol is such that there can never be more than 21 million.

Ether works in a similar way to bitcoin, but ethereum is different. It is a worldwide software platform with no host, on which developers are building thousands of blockchain-based applications.

This means these applications can all run without being controlled by a company. Examples include cryptocurrency exchanges, insurance systems, and new kinds of gaming.

At the heart of the platform is the idea of smart contracts, which are automated agreements that ensure that money and assets change hands when certain conditions have been fulfilled. All transactions on the platform ultimately use ether, and the success of the platform is why ether has been t...