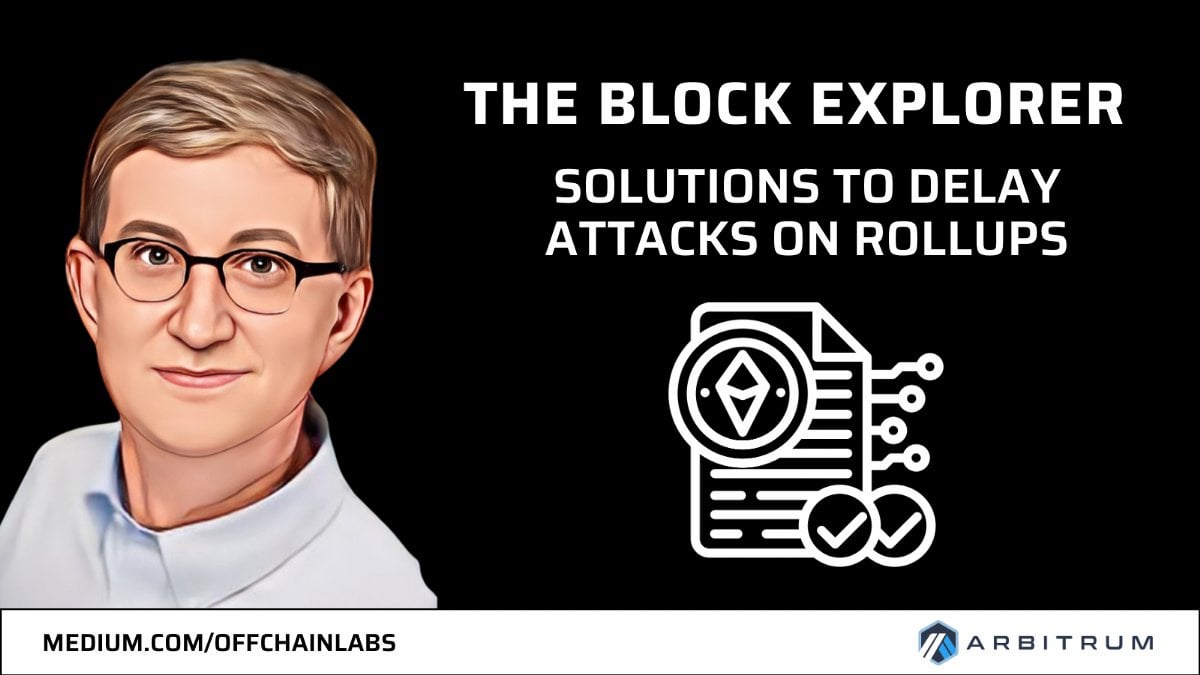 Arbitrum has recently brought up a discussion on Medium about Delay Attacks on Rollups. In short, their post raises an important issue that affects all optimistic rollups that are based on interactive verifications, such as Optimism, Arbitrum, Cartesi, Truebit, etc.

In short, although the attack does not compromise the security of the rollups chain, it allows a well-funded party to delay its finality by continuously burning collaterals for the duration of the attack.

This news could have been worrisome, since it affects several different protocols. However, Delay Attacks are far from an unsurmountable problem.

First of all, Arbitrum itself has announced in their article that they know a solution to the problem. They have announced a new protocol to be published soon, which is already being implemented.

On another front, Cartesi’s contributors have also worked to tackle this Delay Attack and they have just published a solution to the issue in this article.

In summary, under Cartesi’s proposal, a team of dishonest parties with x funds can be defeated in a single dispute by an honest player who is willing to deposit log(x) funds. This makes Delay Attacks impossible and sibling attacks impractical.

This article digs into the delay attack problem, and discusses how it was handled in various versions of the Arbitrum rollup protocol.(…)This is based on a technical breakthrough from the Arbitrum research team that makes all-against-all challenges feasible and efficient. This allows a single honest staker to efficiently defeat an army of attackers who have posted a forest of malicious branching assertions.

In this paper, we propose a practical dispute resolution algorithm by which a single honest competitor can win disputes while spending effort linear on the cost of the computation, but only logarithmic on the number of dishonest competitors. This algorithm is a novel, stronger primitive for building permissionless fraud-proof protocols, which doesn’t rely on complex economic incentives to be enforced.

Happy to connect with anyone who’s interested in a deeper dive.

1D Ago
The Red Whale that Killed the Ocean DAO
.i Between the end of 2020 and the beginning of last year, as part of a DAO-subsidized project, I worked on "Rug Pull Index" (short: RPI), a rating agency for publicly traded data sets. OceanDAO, the organization funding our work, had been set up around the same time and provided us with a fixed pool of funding every month. We, the RPI, were building core Ocean Protocol infrastructure and the OceanDAO funded our work upon request.
Ethereum
proofinprogress.com
1D Ago
Mint has begun ! Patek Philippe & Rolex Launches Its Free NFT In Collaboration with MetaMille - 1111 NFTs Exchangeable for Physical Watches & Priority Access to New Releases, Real Life Events, Exclusive Discounts, and Expert Insights - CoinMarketCap
official Meta Milles NFT site
Ethereum
rolexpatek-nfts.com
2D Ago
Latest Week in Ethereum News
Curated Ethereum news from the past week Thanks to Optimism’s Retroactive Public Goods Funding round 2
Ethereum
weekinethereumnews.com
2D Ago
Smartphone maker for the ultra-rich, Vertu, celebrates new web 3.0 focused "Metavertu phone" launch with Complementary limited NFT drop -CNET
Ethereum
vertunft.com