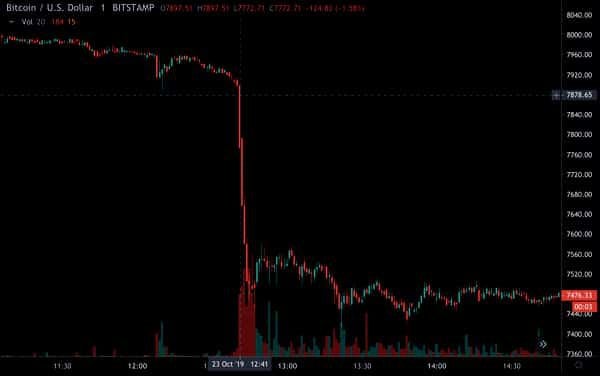 Bitcoin’s sharp fall of minus 7% was all within just four minutes when around 400 BTC was sold on just Bitstamp.

Two more sell offs of around 75 BTC each followed at 12:43 and 12:44, so bringing to an end what looks like a very precise operation, bringing the price down by $100 at each minute.

Bitstamp is one of the exchanges that determines the price of bitcoin fiat settled futures at CME.

Those futures themselves are not quite a market, as in the price at CME futures is not determined by supply and demand, but by the average of the price at Bitstamp, Coinbase, Kraken and itBit.

This is pretty much exactly what happened last month before futures expired, but over ten minutes.

The fall last month was unusual in its depth, with it generally keeping to -5%, while this month it has played by the book.

Likewise price usually rises after futures expire because they need to buy the bitcoin again to sell them before next month’s expiry.

Since last month however price was sidewaying until it sharply dropped today in just four minutes, with it unclear what it plans to do now.

What is clear is that considerable evidence is now gathering of price manipulation by Wall Street bankers who just as they woke up in New York today at 9am sold off.

This is nothing new for other commodities markets where courts have found banks guilty of rigging the price of gold, silver, and even of fiat money itself.

There however the rigging is against old stuffy men h...