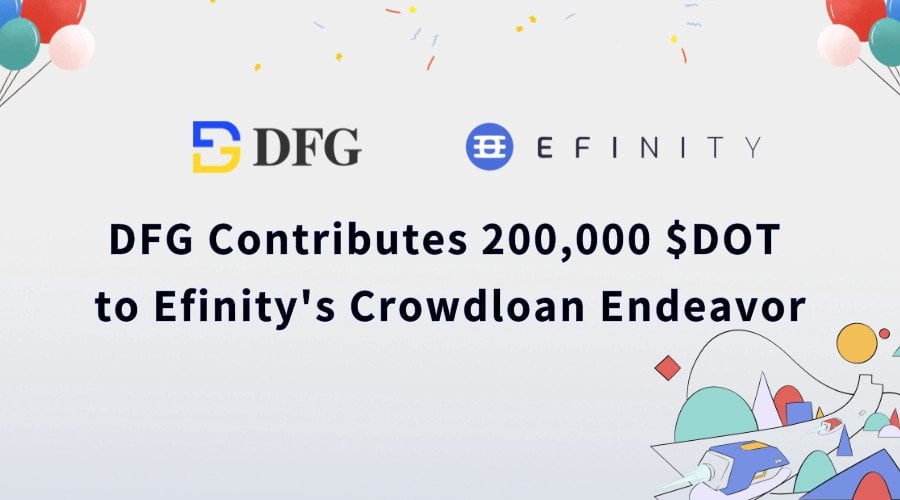 With the Polkadot Parachain Auctions underway since November 11, 2021, and a race for individuals around the world to stake their $DOT as a way to support the most promising projects competing for the first batch of slots, DFG has decided to assist, yet again, and deploy its held $DOT as a way to fuel a member of its Polkadot Ecosystem Fund’s mission to achieve one of the first slots available in this parachain auctions.

By allocating 200,000 $DOT to the Efinity crowdloans, DFG reaffirms its commitment to support as many Polkadot partners as possible in order to achieve a parachain slot and continue working towards making blockchain and Web3 a fully adopted technological advancement while providing the world with the base layer of solutions that will promote paradigm-shifting and disruptive ideas.

Efinity is the next-generation blockchain for digital assets, built on Polkadot and developed by the Enjin team who have proved their capabilities by building NFT standard, ERC-1155, on Ethereum. Efinity aims to create a brand-new ecosystem that offers a more developer and user-friendly experience. Through the collaboration with Polkadot, Efinity will be able to provide more accessible and scalable solutions so that everyone can participate in this emerging NFT economy. With users being the priority, Efinity will present us with an accessible user experience that is more interesting and simpler, which makes it the future blockchain designated for NFT.

Enjin was founded in 2009 by Maxim Blagov and Witek Radomski. Over the following decade, they organically grew their first product, the Enjin Network, to over 20 million gamers worldwide. In 2017, the company hosted a successful ICO of Enjin Coin (ENJ) and began pioneering a vision for non-fungible tokens (NFTs). Establishing itself as a world-class blockchain developer, Enjin began building a holistic ecosystem of user-first products that anyone can use to easily develop, trade, monetize, and market ...

Ravenmint - A Game Changer For NFTs On The Ravencoin Blockchain?