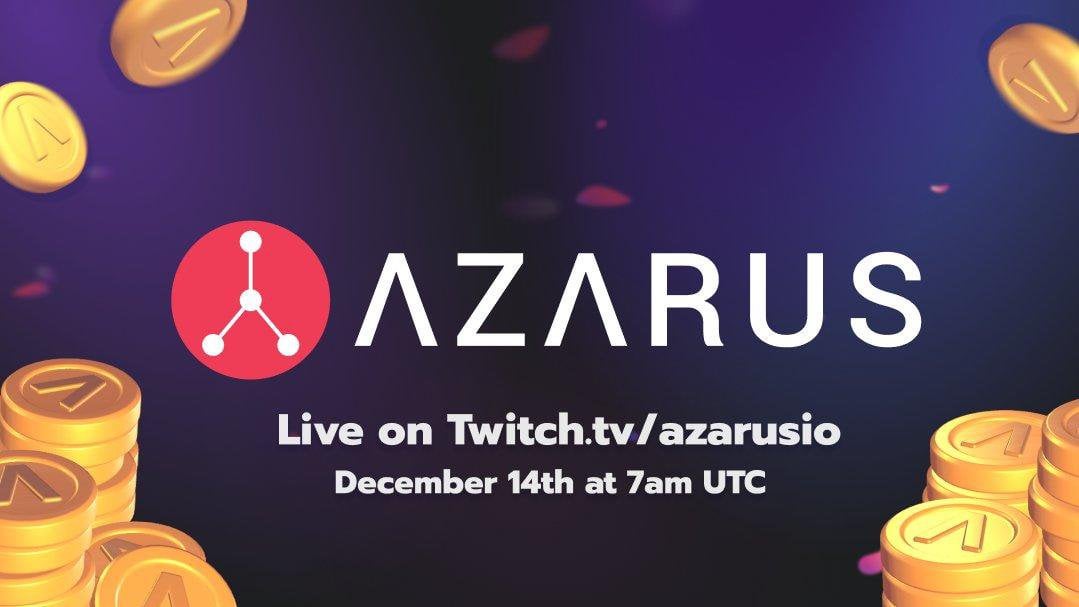 Azarus will be hosting a keynote stream in partnership with Animoca Brands at 7am UTC on Wednesday, December 14th (11pm PST on Tuesday, December 13th) to reveal the imminent listing on Uniswap of the AzaCoin, an ERC-20 Token on Ethereum Mainnet, which will list on Uniswap on January 11, 2023.

Founded in 2018, Azarus has been demonstrating that “streams are not TV” through its highly engaging Overlay Games. With Azarus, streamers run interactive games over their streams to play along in real-time with their entire audience, sponsored by brands. Overlay Games have generated over 4 million watch hours, distributing $2 million in prizes in the form of loyalty points redeemable in the Azarus Store.

Azarus is moving into a crypto-native rewards program, which will expose millions of loyal players to the benefits of true digital ownership. Azarus is upgrading its AZA points into a crypto-native token, the AzaCoin, giving Azarus holders ownership of the value of their attention and engagement. The AzaCoin will serve as a utility and governance token with the following benefits to the ecosystem:

For Streamers: Get immediate access to your earnings with AzaCoins. Host game sessions using your channel’s community wallet. Engage your community through voting. For Streaming Communities: Gain full ownership of your rewards as AzaCoin is distributed directly to a winner’s crypto wallet offering full control to redeem prizes, bid and buy instantly on streams or to purchase digital assets on the Azarus Marketplace For Brands: Run and sponsor games for streamers using Azarus as part of their programming

This shared desire to participate in the Azarus ecosystem creates a mutually beneficial opportunity as stakeholder incentives align, amplifying the value of the token.

“Azarus has been built on blockchain since the early days, with the vision to materialize the true nature of streams as a distributed digital stadium,” said founder Alex Cassassovici. “Listing the AzaCoin today brings us one step closer to this vision, aligning incentives of all stakeholders and giving the fans true ownership of the rewards they collect playing on stream.” “It’s our belief that Azarus will bring web3 to millions of new users,” wrote Animoca Brands founder Yat Siu. “Since our initial investment, we have been continually impressed at Alex’s leadership in transforming the medium of streaming into web3 that has already rewarded millions of players with millions of dollars. We’re beyond excited for the future of Azarus and are proud investors and partners.”

Holders of AzaCoin will have the option to stake their token for 3 months upon earning them in return for receiving a percentage yield back. As a governance token, AzaCoin allows viewers to vote on the usage of AzaCoins in the community wallet to impact the life cycle of Azarus Games on their preferred stream. To learn more about the token, head to azarus.io/azacoin.

Viewers can head over to any Azarus-enabled streams to start playing Azarus Games alongside their favorite creators and other audience members. When they answer trivia questions correctly they will earn AzaCoins. Viewers can join the keynote stream at 7am UTC on Wednesday Dec. 14th for an opportunity to win AzaCoins and learn about the token release roadmap.

About AzarusAzarus is the pioneer of Overlay Games, a new form of casual games that layer over streams. Overlay Games are massively multiplayer, simple, fun, and rewarding. Azarus offers the first platform that provides an environment to build, distribute and monetize Overlay Games on any stream. Overlay Games bring together massive live audiences, revealing the true nature of streams as an interactive medium, supporting the company’s vision that “Streams are not TV.”

6M Ago
The First Ultimate NFT Fishing Metaverse
FishVerse is a blockchain-based fishing game that joins millions of fishing enthusiasts in a community where you can buy and breed NTF fish.
BitShares
thefishverse.com
1Y Ago
Shiba Inu: A Massive Coin Burn Will Lift this Canine Crypto's Price Soon
Shiba Inu's price surge this year represents not only the dog-themed coin's rising popularity, but an evolution of this once pure meme coin.
BitShares
investorplace.com
1Y Ago
DAOLand 101. General Intro, Research and Insights
Many users complain about having joined the Axie Infinity and other gaming projects too late. However, as with everything in crypto, the next great opportunity is always around the corner — meet the…
BitShares
blog.daoland.io