The Economics of 21 Million: The importance of Bitcoin's finite supply. Wrote this one yesterday and made custom graphics for it! If you enjoyed it, make sure to follow as I plan on writing more every week :) 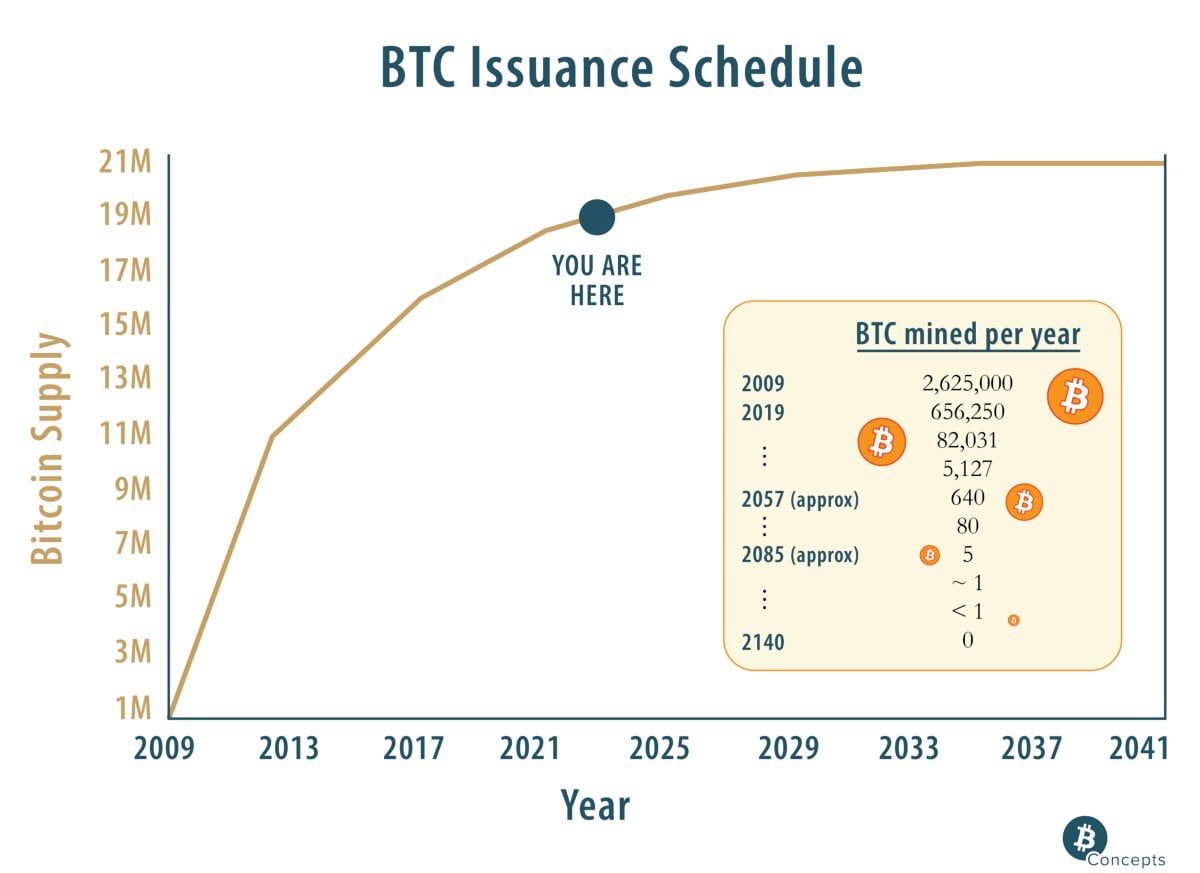 At its core, what guarantees there will only ever be twenty-one million bitcoins is, well, because that is just math. It is a universal mathematical truth that there will only be 21 million bitcoins ever issued, just as 2 + 2 will always equal 4. Bitcoin is software, and software is nothing more than a set of instructions written in code and math instructing computers to perform specific tasks.

By implementing a difficulty adjustment algorithm in computer code, Satoshi made mathematics the ultimate restraint in issuing and distributing bitcoins into circulation. This algorithm is what enables us to know Bitcoin’s future supply and issuance rate with absolute mathematical certainty.

The algorithm adjusts the difficulty of mining bitcoin depending on how quickly bitcoins are mined (how quickly valid blocks are found). This dynamic adjustment of the network’s mining difficulty ensures that no matter how many miners are trying to mine bitcoin, the supply issuance of bitcoin will never be altered.

Bitcoin blocks are added to the blockchain roughly every ten minutes. At the beginning of the network, the block reward was programmed to be 50 bitcoins per block, but after every 210,000 blocks, the block reward drops by half. In other words, the rewards for mining bitcoin are programmed to be halved every four years, guaranteeing a decrease in the amount that can be mined in an algorithmically controlled fashion, regardless of how many miners there are, what the demand for bitcoin is, or what costs are associated with mining. As mining rewards exponentially decrease, so does the number of bitcoin mined each year and distributed into circulation. Astonishingly, by 2025, 20 million bitcoins will already have been mined, leaving the remaining 1 million coins to be mined over 100 more years. Finally, by the year 2140, all twenty-one million bitcoins will have been mined, and there will be no more of them. Because of this, the supply issuance of bitcoin is completely inelastic, making bitcoin the first asset that has actual absolute scarcity, as Saifedean Ammous brilliantly explains:

“Beyond digital scarcity, Bitcoin is also the first example of absolute scarcity, the only liquid commodity (digital or physical) with a set fixed quantity that cannot conceivably be increased. Until the invention of Bitcoin, scarcity was always relative, never absolute. It is a common misconception to imagine that any physical good is finite, or absolutely scarce, because the limit on the quantity we can produce of any good is never its prevalence in the planet, but the effort and time dedicated to producing it…”

By implementing the difficulty adjustment algorithm, Satoshi created the first commodity in history whose supply was not affected by changes in demand. Typically, commodity producers will increase production if demand increases because it also increases their profitability. Conversely, producers can slow production and minimize financial losses if demand for a commodity decreases. Bitcoin, just like any other commodity, has a production cost. But, unlike any other commodity in the history of the world, its supply issuance/production is not affected by rises or falls in demand or price.

New bitcoin are created every block. Every four years, the amount of new bitcoin created per block is halved

Now, why does this matter? Why is it important for bitcoin to have a fixed total supply and issuance schedule?

A quick stroll through history allows us to examine the consequences of arbitrarily increasing a currency’s supply and not abiding by a fixed issuance schedule. Historically, all governments that could have printed money at no cost have done so. Past failed currencies, such as the German Mark or Zimbabwean dollar, among many others, are great examples of governments increasing monetary supply at no cost and ending up causing complete currency debasement. Even today, 180 fiat currencies circulate worldwide, and most of these currencies experience significant recurring devaluations because of rampant increases in money supply and issuance. Tragically, it is usually the most poverty-stricken nations whose currencies debase the most. The reason governments print money is, among many other reasons, primarily political. When governments increase the money supply, they lower the cost of credit, making more money available to people at a lower price. Superficially, this sounds like a net positive, but in reality, it guarantees a cycle of economic booms and worsening busts.

An increased money supply heats the economy in the short term by increasing access to cheap credit (not to be confused with capital). Politicians use the money printing tool to get re-elected because they can point to the economy doing better in the short term and kick the can down the road for when they are out of office. But of course, the economy “doing better” is only an illusion created at the cost of debasing the currency and credit expansion. Even though people have “more” money, that money is worth much less. Every new fiat printed dilutes the worth of the existing money supply; it is that simple. This vicious cycle continues as our elected officials always chase extreme short-term economic growth over long-term sustainable growth; intentionally or not, that is what fiat monetary systems organically incentivize by default.

Through what mechanism does a currency’s value dilute? As the money supply increases, the currency’s value is diluted through inflation. In economics, inflation is an increase in the price level of goods and services. Each currency unit buys fewer goods and services when the general price level increases. In other words, inflation reduces the purchasing power of money. Inflation can be seen as theft because it robs those who earn in that currency of their purchasing power. In some ways, it is even the worst, most cruel form of theft because it is indirect and systemically integrated, and those being robbed are also the poorest members of society (Cantillon effect). Because each currency unit is guaranteed to buy less tomorrow, inflation creates another vicious feedback loop concerning consumption. Immediate and rampant consumption becomes the default standard because your money in the bank today is guaranteed to be worth less tomorrow, so better spend it now while it still has a bit more purchasing power than it will in the future.

Even if one has yet to learn what this graph refers to, just by looking at it, anyone will know something went wrong and that something is not rooted in stability or predictability. Besides demonstrating how effective human restraint is as a stopping mechanism in money printing (spoiler: human restraint is not very effective), this graphic shows something even more enigmatic about our money supply: it can be easily and rapidly manipulated. Contrast the issuance graph of bitcoin and the one for dollar supply, and it quickly becomes apparent which is prone to human manipulation and which is not.

So the questions must be asked: why let monetary policy be at the mercy of unpredictable human greed, incompetence, and corruption when there is a predictable mathematical and, thereby, utterly stable alternative? What would be more valuable, a currency that has infinity in its equation, or one that has 21 million?

If you enjoyed this article make sure to follow me for similar articles, I greatly appreciate it! Thank you for reading

2H Ago
SLP456 Casey Rodarmor What are Ordinals?
Casey Rodarmor joins me to chat about Ordinals and Inscriptions. Now we get into the pros and cons of this, and whether it is bad for Bitcoin. We chat: What Ordinals and Inscriptions are The ‘bull’ case for Ordinals and Inscriptions Do they spam the bitcoin blockchain?  Witness data on the input side, not output…
Bitcoin
stephanlivera.com
7H Ago
Massive step forward for adoption. You can basically live off Bitcoin in South Africa now
All Pick n Pay stores in South Africa can now accept Bitcoin payments using the Lightning network.
Bitcoin
mybroadband.co.za
12H Ago
Retail giant Pick n Pay to accept Bitcoin in 1,628 stores across South Africa
The South African grocery retailer Pick n Pay is expanding its Bitcoin coverage to all 1,628 stores across the country.
Bitcoin
cointelegraph.com
16H Ago
UK strikes: Half a million walk out for higher pay... Someone need to tell them the truth.
Teachers, train drivers and civil servants in the UK demanding pay raises to keep up with rising costs of living participated in a mass strike. The strike led to the closure of some schools and rail disruptions.
Bitcoin
dw.com