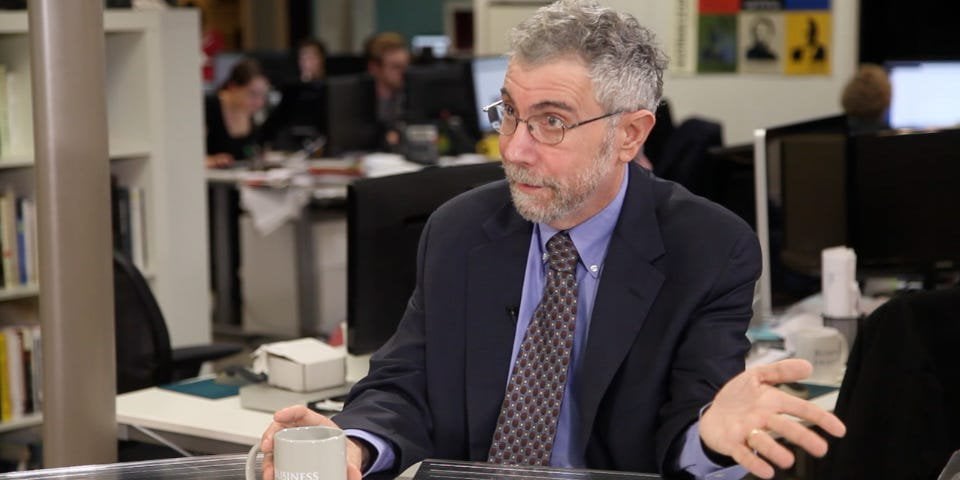 Paul Krugman has compared Tesla stock to bitcoin, saying hype and faith underpin both assets' valuations, and joked he wouldn't trust Elon Musk to take care of his cat.

Tesla stock skyrocketed more than 13-fold between the start of 2020 and its November 2021 peak. It has plunged 73% since then, slashing the electric-vehicle (EV) company's market capitalization from over $1.2 trillion to under $350 billion as of Tuesday's close.

Krugman, in a New York Times column published on Tuesday, asked: "Did the Tesla story ever make sense?"

The Nobel Prize-winning economist argued that Tesla isn't worth as much as Apple, Microsoft, and other Big Tech companies, as it doesn't benefit from significant network effects. Apple has an ecosystem of devices, apps, and services that's inconvenient for users to leave, while Microsoft Word and Excel remain the default choice for businesses as they're the most familiar and the industry standard, he noted.

In contrast, Tesla faces mounting competition in the EV sector from legacy automakers such as GM and Ford, and there are no clear network effects from owning a Tesla versus a rival car, Krugman said. He questioned how Tesla will dominate its market and generate large profits when the excitement around its products inevitably fades.

"It's hard to see what would give Tesla a long-term lock on the electric vehicle business," he said.

The economist asserted that a big chunk of Tesla's popularity stemmed from the perception of Musk as a "cool guy," but that image has faded in recent weeks.

He drew a parallel between the breathless hype and faith that fueled Tesla stock during the pandemic and bitcoin's dramatic rise over the same period, noting the leading cryptocurrency has no clear use beyond money laundering, and its price is now being buoyed by a "hardcore group of true believers."

Krugman also took a dig at Musk for his chaotic start at Twitter. Since he bought the social-media company and became its CEO in October, Twitter has fired then rehired workers, launched then promptly scrapped features, and suspended users only to reinstate them hours later.

"Given what we've seen of Musk's behavior, I wouldn't trust him to feed my cat, let alone run a major corporation," Krugman quipped.

Read more: '2023 is going to be one of the greatest years to invest': A millennial who achieved financial independence at age 30 shares his top investing advice as we head into the new year