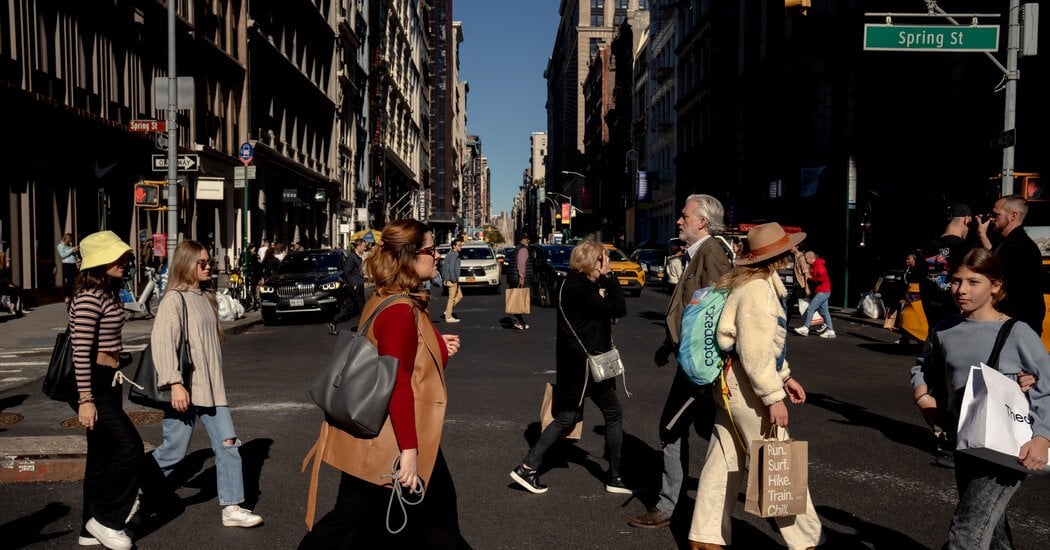 Stocks jolted higher on Thursday, after fresh data showed a moderation in inflation, bolstering investors’ hopes that the Federal Reserve may slow the pace of interest rates increases that have weighed on the market.

The S&P 500 opened for trading with a gain of 3.6 percent, which if it holds through the day would be the best one-day performance for the index this year.

The move followed a 2.1 percent loss for the index on Wednesday as control of Congress remained unclear after the midterm elections and turmoil erupted in cryptocurrency markets following the collapse of one of the largest crypto exchanges.

The Consumer Price Index data provided a tailwind for the market on Thursday, with prices rising slower in October than economists had forecast. U.S. government bond yields, which are particularly sensitive to expectations for future interest rate increases, fell sharply.

“It was a big drop,” said Andrew Brenner, head of international fixed income at National Alliance Securities. “We were expecting something much better than the anticipated number and we got it. It’s much better than expected. Equity markets are going crazy.”

Seema Shah, chief global strategist at Principal Asset Management, said that the numbers would be met with “ovation” in equity markets, noting that the year-over-year pace of inflation is now lower than it was before the conflict in Ukraine sent energy prices soaring. “The long-awaited decline in inflation could now be underway.”

The new inflation data is important in assessing the progress of the Fed’s efforts to reduce stubbornly high inflation by slowing the economy through higher interest rates, which have also contributed to the substantial decline in the stock market this year.

Speaking before the numbers released, some analysts and investors cautioned that it would take a more prolonged period of slowing inflation before the Fed stopped raising interest rates.

Still, “it could be the first step to getting us to a better place,” Ron Temple, the head of U.S. equity at Lazard Asset Management, said on Wednesday.

The Fed chair, Jerome H. Powell, took a hard line at the central bank’s meeting last week, saying that the job of lowering inflation was far from over. Rate increases in the coming months may not be as large as the bumper three-quarter-point moves of the past four Fed meetings, but he said that over time, rates could rise higher than investors had been expecting.

“We believe this is yet another triumph of hope over reality,” John Lynch, chief investment officer for Comerica Wealth Management, said on Thursday. “Sustained price pressures in housing, wages and energy indicate a prolonged battle against inflation. Indeed, Fed Chair Jerome Powell last week was unambiguous in his comments that rates would remain higher for longer.”

Nonetheless, investors have priced out any chance of a fifth consecutive three-quarter point increase in December, instead anticipating a smaller 0.5 percentage point increase to the Fed’s policy rate.

Market expectations for where interest rates will move to next year dropped from a peak of more than 5 percent to around 4.9 percent on Thursday, as investors dialed back expectations of the number of interest rate increases to come.

The yield on the two-year Treasury bond, which is sensitive to changes in Fed policy, plummeted by more than 0.2 percent, to around 4.4 percent. The dollar also fell swiftly, down 1 percent against a basket of currencies that represent the United States’ major trading partners.

3H Ago
This crypto mining farm is using cow poop to fuel it’s miners. Is this the future of crypto mining?
Bitcoin
instagram.com
3H Ago
Non-whale investors buy $4.7 billion worth of Bitcoin in a month
"Shrimp" investors are said to have added 96,200 BTC (worth $1.6 billion) to their portfolios, which is an "all-time high balance increase."
Bitcoin
news.todayq.com
4H Ago
TimeSocial can help you Earn $500 Daily
Timesocial is the web's most popular earning platform. The fastest growing earning network to make money online from anywhere, anytime. A company that turns your time into money.
Bitcoin
ref.timesocial.co
5H Ago
Fidelity, one of the world’s largest financial services providers, has officially started opening retail bitcoin trading accounts
Certain users have received emails detailing their new access to purchase and sell bitcoin on the Fidelity platform.
Bitcoin
bitcoinmagazine.com