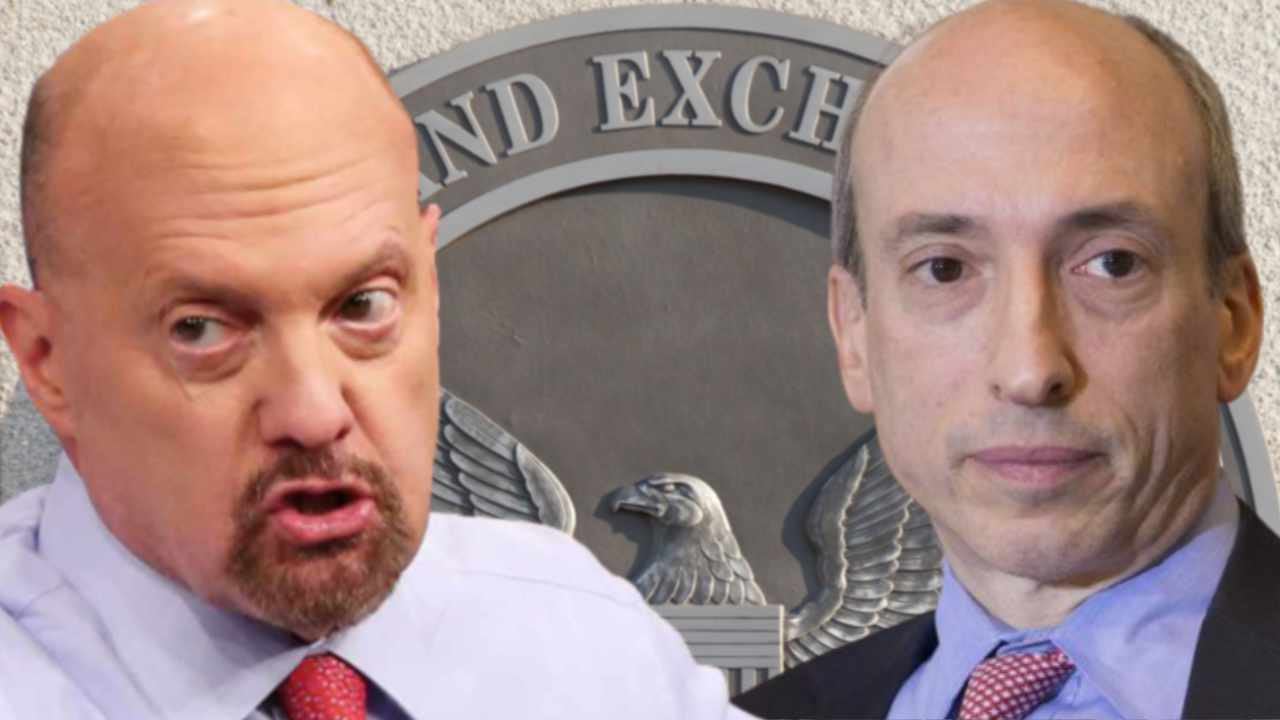 The host of Mad Money, Jim Cramer, has thanked Securities and Exchange Commission (SEC) Chairman Gary Gensler for standing up to the “crypto bullies” who want the regulator to approve a spot bitcoin exchange-traded fund (ETF). Cramer has repeatedly warned about the SEC cracking down on uncompliant crypto firms, urging investors to get out of the asset class now.

The host of CNBC’s Mad Money show, Jim Cramer, has thanked the chairman of the U.S. Securities and Exchange Commission (SEC), Gary Gensler, for not approving a spot bitcoin exchange-traded fund (ETF). Cramer is a former hedge fund manager who co-founded Thestreet.com, a financial news and literacy website.

Thank you, SEC Chief Gary Gensler for standing up to the crypto bullies who wanted an ETF. They could have been blown to kingdom come by Genesis Global, now filing for bankruptcy.

Another DCG subsidiary is digital asset manager Grayscale Investments, which has been trying to convert its flagship Bitcoin Trust (GBTC) into a spot bitcoin ETF. However, the securities watchdog has not approved the company’s filing. In June last year, Grayscale filed a lawsuit against the SEC challenging the regulator’s decision to reject its bitcoin ETF application.

In addition, Bloomberg reported earlier this month that the U.S. Department of Justice (DOJ)’s Eastern District of New York and the SEC are investigating internal transfers between Genesis and DCG.

Many People Disagree With Cramer

Many bitcoin proponents on Twitter disagreed with the Mad Money host. Lawyer John Deaton wrote: “So anyone who favored a spot BTC ETF is a bully? Cramer believes people were protected by Gary Gensler NOT granting a spot ETF, even though BTC futures and short ETFs exist. These companies didn’t get in trouble because of bitcoin.” ETF Store President Nate Geraci opined:

I would argue exact opposite… SEC failing to approve spot ETF led to rise of GBTC arbitrage trade (where large accredited investors took advantage of retail). Meaningful portion of Genesis solvency issues stem from lending to 3AC, etc to execute that arbitrage trade (which blew up).

Cramer has repeatedly warned about the SEC doing a “roundup” of uncompliant crypto firms, advising investors to get out of crypto now. “I wouldn’t touch crypto in a million years,” the Mad Money host stressed. He often cited John Reed Stark, SEC’s former head of internet enforcement, who recently said a “regulatory onslaught is just beginning.” Following the SEC lawsuit against Gemini and Genesis, Cramer tweeted: “Here comes the crackdown: Genesis and Gemini are first. We have had a fabulous short squeeze run. Ka-ching. Ka-ching.”

While Cramer appreciated Gensler and the SEC, many people have criticized the SEC chairman for focusing on enforcement and not taking action to prevent the FTX catastrophe after several meetings with former FTX CEO Sam Bankman-Fried (SBF).

Congressman Tom Emmer (R-MN) commented on Twitter last week after the SEC announced charges against Gemini and Genesis: “Gary Gensler is once again late to the game, ‘protecting’ no one. Quite clear that his political ‘regulation through enforcement’ strategy hurts everyday Americans.” In a follow-up tweet, the lawmaker wrote:

Gary Gensler, when can we expect proactive guidance instead of leaving the industry to interpret the rules of the road through your after-the-fact enforcement actions?

Tags in this story

What do you think about Jim Cramer thanking SEC Chairman Gary Gensler? Let us know in the comments section below.


A student of Austrian Economics, Kevin found Bitcoin in 2011 and has been an evangelist ever since. His interests lie in Bitcoin security, open-source systems, network effects and the intersection between economics and cryptography.

Disclaimer: This article is for informational purposes only. It is not a direct offer or solicitation of an offer to buy or sell, or a recommendation or endorsement of any products, services, or companies. Bitcoin.com does not provide investment, tax, legal, or accounting advice. Neither the company nor the author is responsible, directly or indirectly, for any damage or loss caused or alleged to be caused by or in connection with the use of or reliance on any content, goods or services mentioned in this article.