Even After FTX, S.E.C. Chair Sees No Need for New Crypto Laws 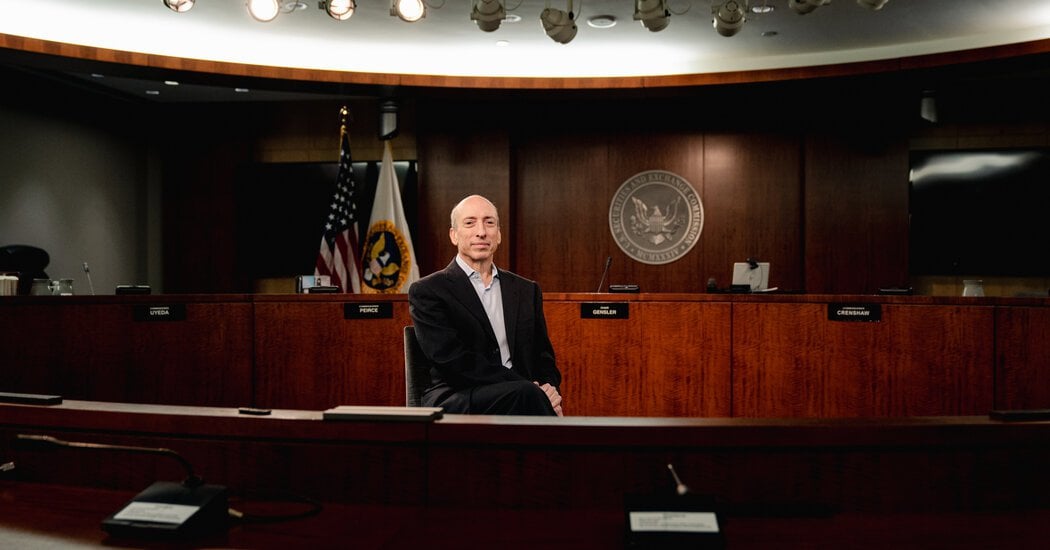 The swift collapse of the cryptocurrency empire FTX is prompting urgent calls in Washington for legislation to rein in the digital asset industry.

But after two top executives tied to FTX pleaded guilty to fraud charges on Wednesday, Gary Gensler, the chair of the Securities and Exchange Commission, is pushing back on calls for new laws, arguing that existing S.E.C. rules and Supreme Court decisions suffice and that crypto issuers and exchanges simply need to come into compliance.

“The roadway is getting shorter,” Mr. Gensler said in an interview on Thursday, warning other crypto issuers and exchanges that are not registered with the agency that they could soon find themselves facing enforcement actions.

On Wednesday, the S.E.C. announced that it had settled civil fraud charges with two former top executives of the FTX empire, Gary Wang, a co-founder of the exchange, and Caroline Ellison, who was the chief executive of FTX’s trading arm, Alameda Research, which used billions in FTX customer funds to back its very risky bets.

The former executives pleaded guilty to criminal fraud charges filed by federal prosecutors in Manhattan, and they are cooperating with the authorities in their investigations of FTX and its founder, Sam Bankman-Fried, who was extradited from the Bahamas on Wednesday night. On Thursday, a federal judge in Manhattan approved a restrictive bail package for Mr. Bankman-Fried.

What to Know About the Collapse of FTX Card 1 of 5 What is FTX? FTX is a now bankrupt company that was one of the world’s largest cryptocurrency exchanges. It enabled customers to trade digital currencies for other digital currencies or traditional money; it also had a native cryptocurrency known as FTT. The company, based in the Bahamas, built its business on risky trading options that are not legal in the United States. Who is Sam Bankman-Fried? He is the 30-year-old founder of FTX and the former chief executive of FTX. Once a golden boy of the crypto industry, he was a major donor to the Democratic Party and known for his commitment to effective altruism, a charitable movement that urges adherents to give away their wealth in efficient and logical ways. How did FTX’s troubles begin? Last year, Changpeng Zhao, the chief executive of Binance, the world’s largest crypto exchange, sold the stake he held in FTX back to Mr. Bankman-Fried, receiving a number of FTT tokens in exchange. In November, Mr. Zhao said he would sell the tokens and expressed concerns about FTX’s financial stability. The move, which drove down the price of FTT, spooked investors. What led to FTX's collapse? Mr. Zhao’s announcement drove down the price and spooked investors. Traders rushed to withdraw from FTX, causing the company to have a $8 billion shortfall. Binance, FTX’s main rival, offered a loan to save the company but later pulled out, forcing FTX to file for bankruptcy on Nov. 11. Why was Mr. Bankman-Fried arrested? FTX’s collapse kicked off investigations by the Justice Department and the Securities and Exchange Commission focused on whether FTX improperly used customer funds to prop up Alameda Research, a crypto trading platform that Mr. Bankman-Fried had helped start. On Dec. 12, Mr. Bankman-Fried was arrested in the Bahamas for lying to investors and committing fraud. The day after, the S.E.C. also filed civil fraud charges.

Among other offenses, the complaint states that Ms. Ellison conspired with Alameda and Mr. Bankman-Fried to prop up the value of FTT, a cryptocurrency that the exchange issued and Alameda used as collateral for its trading activities.

Many other crypto exchanges also issue their own tokens, including the world’s largest, Binance, which issues BNB. Separately, thousands of start-ups issue digital currencies to generate capital for their ventures, and these are traded on exchanges, or “storefronts.”

But only about six in 10,000 or so of the crypto tokens in circulation at any given moment are registered with the S.E.C., Mr. Gensler estimated, which means that investors don’t get the same kinds of disclosures they would get with investments in stocks.

So the public shouldn’t take confidence in the numbers reported about the volumes traded or the tokens’ values, Mr. Gensler said.

“Financial history would tell you that most of these tokens will fail,” he said, because most entrepreneurial ventures do. And “micro-currencies,” or currencies that have very limited acceptance, have not been adopted because they are simply not useful, he added.

Many of those thousands of cryptocurrencies listed on exchanges and websites that track digital asset markets are thinly traded cryptocurrencies, Mr. Gensler said, and are subject to the same kind of manipulation as micro-cap companies, or stocks of small publicly traded companies with a market capitalization of about $50 million to $300 million.

Insiders on these projects can “sell the public on an idea while they’re potentially fraudulently pumping up the stock,” Mr. Gensler said.

“This leads to distorted incentives and puts the public further at risk of the token not being properly registered and having proper disclosures and complying with the various provisions of the securities law about anti-fraud and anti-manipulation,” he added.

Mr. Gensler said he hoped that the civil fraud charges against Mr. Bankman-Fried and charges with Ms. Ellison and Mr. Wang would show the crypto community that their operations must comply with existing securities laws.

Mr. Gensler said he would support legislation to regulate certain crypto sectors, like stablecoins — digital assets ostensibly pegged to the value of a stable asset like the dollar that often serve as a bridge between the worlds of traditional and futuristic finance. There is clearly investor interest in such assets, he said, and some of those involved in traditional finance are intrigued by the prospects. But he is wary of bills that could undermine the S.E.C.’s authority.

“I believe that securities law is quite robust and covers much of the activity,” Mr. Gensler concluded, “not only of the tokens but particularly the intermediaries in crypto securities.”