Coinbase CEO slams Sam Bankman-Fried: 'This guy just committed a $10 billion fraud, and why is he getting treated with kid gloves?' 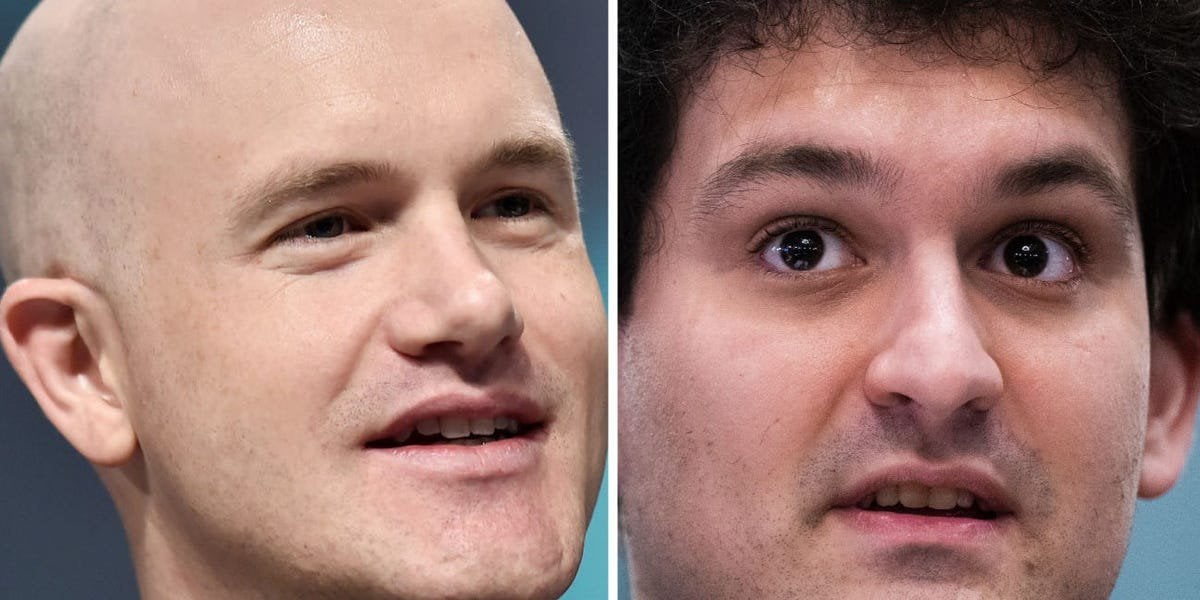 Watching how FTX's collapse has unfolded, Armstrong told Stratechery's Ben Thompson in a podcast interview that he felt the "mainstream media" had given the disgraced cryptocurrency CEO "a lot of softball interviews."

"I mean, this guy just committed a $10 billion fraud, and why is he getting treated with kid gloves?" Armstrong said.

He pointed to a recent Twitter exchange between Bankman-Fried and Rep. Maxine Waters of California where the congresswoman "very politely," Armstrong said, asked the FTX founder to attend the US House Committee on Financial Services' hearing next week.

"We appreciate that you've been candid in your discussions about what happened at #FTX," Waters tweeted. "Your willingness to talk to the public will help the company's customers, investors, and others. To that end, we would welcome your participation in our hearing on the 13th."

Bankman-Fried replied that when he's "finished learning and reviewing what happened, I would feel like it was my duty to appear before the committee and explain," adding that he's "not sure that will happen by the 13th."

Armstrong described Bankman-Fried's reply as "politely deferring" and said the exchange "was bizarre." Waters has since said "a subpoena is definitely on the table" if Bankman-Fried doesn't show up.

"Compare her tweets about Mark Zuckerberg, for instance, who never stole $10 billion from people, whatever you think about the guy," Armstrong said.

Waters criticized Zuckerberg in 2019 as he planned to launch a global digital currency called libra.

"Misuse! Manipulation! Discrimination! Criminal Activity!" Waters tweeted. "Just a few of Facebook's egregious offenses & now they have the nerve to launch a #BigTechTakeover in the form of a currency that could rival the U.S. Dollar?! Is it 10 o'clock yet? Mr. Zuckerberg & I have a lot to discuss."

Armstrong said the moving of customer funds from FTX to Bankman-Fried's trading company, Alameda Research, represented "a violation not only of the terms of service as it's written as far as I understand it, but it's also probably just against the law and outright fraud."

He's not the only crypto CEO who's recently criticized the former FTX CEO.

Changpeng Zhao, the CEO of Binance, tweeted Tuesday: "SBF is one of the greatest fraudsters in history, he is also a master manipulator when it comes to media and key opinion leaders."

He added that FTX "killed themselves (and their users) because they stole billions of dollars of user funds."

Binance had planned to bail out its rival at the beginning of November after FTX asked for help amid a "liquidity crunch."

The next day, however, Binance pulled out of the deal, pointing to "news reports regarding mishandled customer funds and alleged US agency investigations."

Armstrong said even if given the chance to interview Bankman-Fried himself, he didn't "think I have any questions at this point."

"But I kind of just want to turn the page on the whole thing, to be honest," Armstrong told Thompson. "The bankruptcy lawyers, and the DOJ, and everybody are going to have to figure out how to hopefully put these folks behind bars. Not just Sam but the other people involved."

10H Ago
The Ethics Of Mixing
Is mixing or coinjoining ethical? In his essay the author discovers how much harm banking regulation cases to customers and why mixing is ethical.d
Bitcoin
bitcoinnews.com
12H Ago
Bitcoin price is up, but BTC mining stocks could remain vulnerable throughout 2023
Bitcoin
allcryptonews.site
13H Ago
CoinJoin: Compare All Implementations 2023
It is obvious that no one agrees on “how to do CoinJoins right” and how to best optimize user privacy with block space efficiency
Bitcoin
bitcoinnews.com
13H Ago
Gold mining contaminates land and fresh water, so why all the focus on just bitcoin mining?
While there have been improvements to mining practices in recent years, significant environmental risks remain. Negative impacts can vary from the sedimentation caused by poorly built roads during exploration through to the sediment, and disturbance of water during mine construction. Water pollution from mine waste rock and tailings may need to be managed for decades, if not centuries, after closure.
Bitcoin
safewater.org