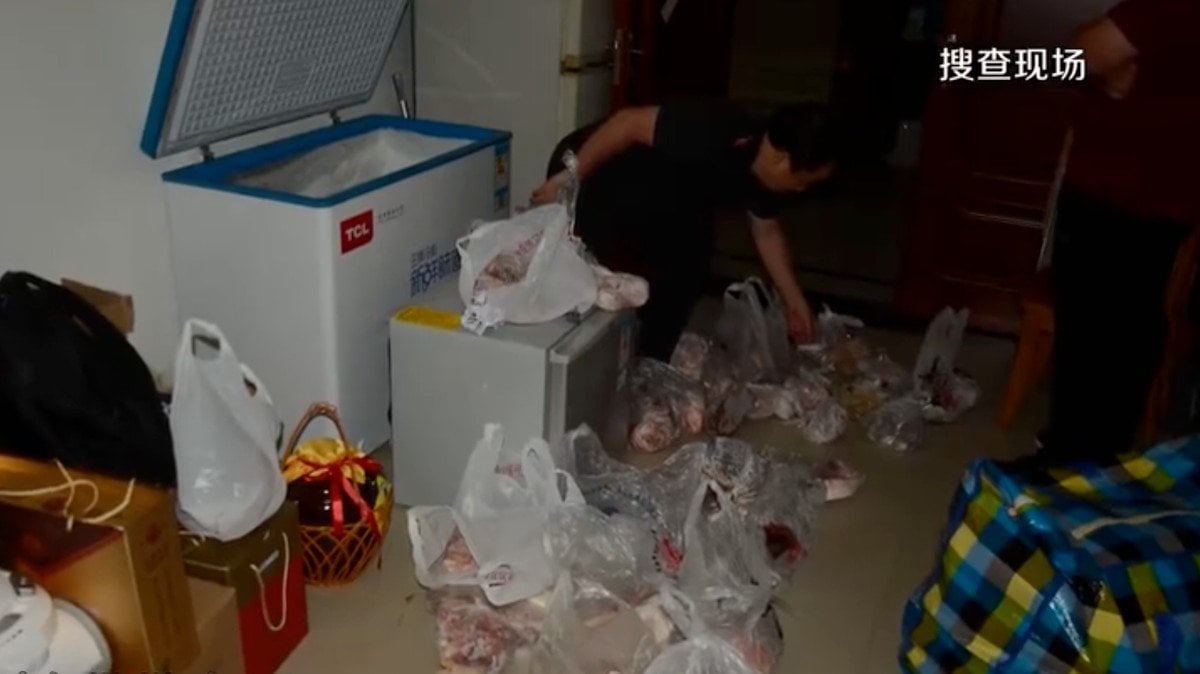 A new video released by a Chinese anti-corruption agency revealed a corrupt Chinese official’s unusual method of hiding his ill-gotten gains.Last April, authorities in the eastern province of Zhejiang launched an official probe into Jiang Xunbo, a retired top official at the prefecture-level city of Quzhou, who was accused of receiving millions in bribes from different corporate executives. Jiang confessed a day after the investigation began. The video, posted on Sunday by the Zhejiang provincial supervisory committee on the social media platform WeChat, showed footage of officers raiding his mansion. They found bags after bags of frozen meat in his freezer, including chickens, ducks, and fish stuffed with plastic-wrapped gold bars and jewelery. They also uncovered stacks of debit and gift cards Jiang had buried under bamboo trees in his garden. It also showed Jiang, dressed in a white hazmat suit, sobbing in court. “I accept the legal consequences and deeply regret my crimes,” Jiang said in tears.  Jiang “used his power as a tool to gather money,” the video said. He allegedly received over a million yuan in gifts from business executives and his subordinates during the lunar new year holidays from 1998 to 2018. In 2001, during a business meeting with a paper company in Shanghai, he was given an envelope, which contained $8,000 in cash, according to the video.Jiang’s wife also accepted money on his behalf when he was hospitalized in 2010 and exerted influence in his name, according to the allegations. When her brother’s printing mill received public complaints for pollution, she pressed the relevant authorities to waive the environmental penalties.  According to the Central Commission for Discipline Inspection, the country’s top anti-corruption body, Jiang was sentenced in January to seven years and six months in jail and fined 500,000 yuan ($69,000) for accepting bribes.Jiang was used by the Chinese government as an example that even retired officials would not escape punishment. State outlets have been posting short documentaries on corruption to warn and pressure other officials. Chinese President Xi Jinping’s sweeping campaign against corruption has ensnared more than 1.5 million party members over the years, including some 1,100 cadres in this year alone, though critics said Xi used the campaign partly as a cover to purge political rivals and consolidate his power.  Xi renewed his pledge to crack down on party cadres who colluded with businesses at the national party congress last month, where he secured an unprecedented third term as leader of the country. He vowed “absolutely no mercy” for corrupt officials. In another sign that the crusade is continuing, Fan Yifei, a top official of the Chinese central bank, recently became yet another political figure to come under scrutiny. Anti-corruption authorities on Saturday announced an investigation into his “suspected serious violations of discipline and law,” without offering further details. Follow Rachel Cheung on Twitter and Instagram.

1H Ago
Exploring How Crypto Could Change the World of Money
From its curious beginnings to recent headlines of gloom – and lots of plot twists between – the new form of digital currency is staking its place in the world. A College of Technology class examines what bitcoin is, why it is not what you see above, and how it might soon shift the rules of global finance.
Bitcoin
uh.edu
2H Ago
El Salvador, The First Domino Of Hyper Bitcoinization
This article will give you an overview of the top Bitcoin companies working on the needs of Salvadorians, as well as national politics, public opinion towards Bitcoin, regulation, and naturalization in El Salvador.
Bitcoin
juangalt.com
2H Ago
One Of Coinbase's First Investors Says Crypto Is Worthless And Should Be Shut Down
Coinbase is the world’s largest cryptocurrency exchange and one of the most successful companies in the crypto space.
Bitcoin
thesized.com
5H Ago
US Justice Department Wants FTX Fraud Allegations to Be Investigated
The collapse was described as the "fastest big corporate failure in American history," in a court filing.
Bitcoin
coindesk.com