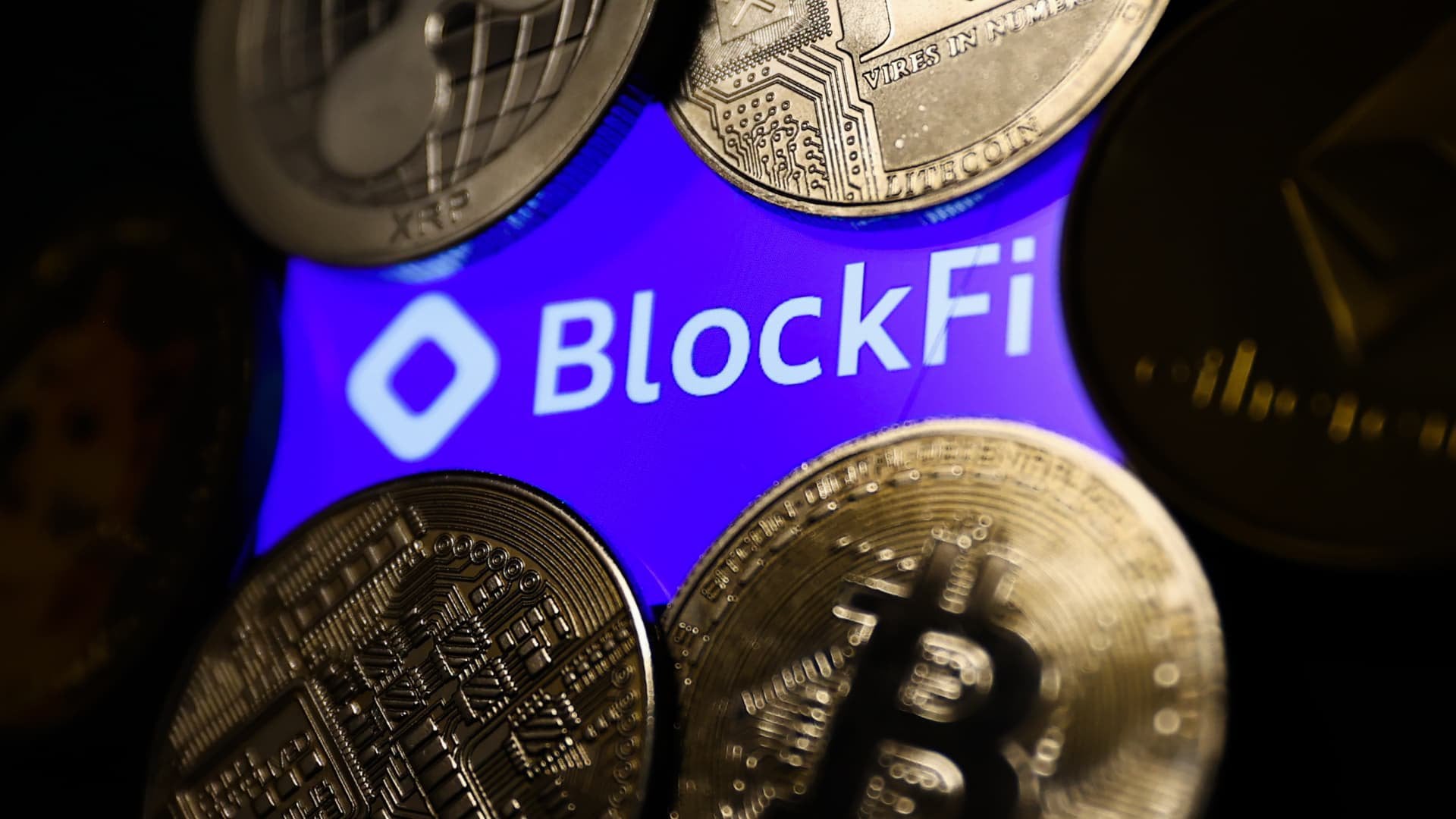 BlockFi logo displayed on a phone screen and representation of cryptocurrencies are seen in this illustration photo taken in Krakow, Poland on November 14, 2022.

Distressed crypto firm BlockFi has filed for Chapter 11 bankruptcy protection in the United States Bankruptcy Court for the District of New Jersey following the implosion of putative acquirer FTX.

In the filing, the company indicated that it had more than 100,000 creditors, with liabilities and assets ranging from $1 billion to $10 billion.

In the filing, the company listed an outstanding $275 million loan to FTX US, the American arm of Sam Bankman-Fried's now-bankrupt empire.

A BlockFi subsidiary also moved for bankruptcy in Bermuda concurrently with the American filing.

Bermuda, like the Bahamas, has embraced crypto as the future of finance. Both established frameworks to deal specifically with crypto assets and digital currencies. Both the Bahamas, with FTX's bankruptcy, and now Bermuda, with BlockFi's, face the first significant legal tests of their crypto regulations.

BlockFi's bankruptcy filing shows that the company's largest disclosed client has a balance of nearly $28 million.

"BlockFi looks forward to a transparent process that achieves the best outcome for all clients and other stakeholders," Berkeley Research Group's Mark Renzi said in a press statement. BRG serves as BlockFi's financial advisor.

The crypto company, which offers a trading exchange and interest-bearing custodial service for cryptocurrencies, was one of many firms to face serious liquidity issues after the implosion of Three Arrows Capital.

The Jersey City, New Jersey-based company had already halted withdrawals of customer deposits and admitted that it had "significant exposure" to the now-bankrupt crypto exchange FTX and its sister trading house, Alameda Research.

"We do have significant exposure to FTX and associated corporate entities that encompasses obligations owed to us by Alameda, assets held at FTX.com, and undrawn amounts from our credit line with FTX.US," BlockFi previously said.

The company started talking with restructuring professionals in the days after FTX's bankruptcy filing, according to people familiar with the matter.

A representative from BlockFi did not immediately respond to requests for comment.

BlockFi — which was last valued at $4.8 billion, according to PitchBook — is among many crypto firms feeling the pressure of FTX's collapse. In July, FTX swooped in to help BlockFi stave off bankruptcy by extending a $400 million revolving credit facility and offering to potentially buy the beleaguered lender.

Sam Bankman-Fried's cryptocurrency exchange FTX filed for Chapter 11 bankruptcy protection in the U.S. on Nov. 11, and the contagion effect across the crypto sector has been swift.

Approximately 130 additional affiliated companies are part of the proceedings, including Alameda Research, Bankman-Fried's crypto trading firm, and FTX.us, the company's U.S. subsidiary. FTX's new CEO John Ray said in a filing with the Delaware Bankruptcy Court that "in his 40 years of legal and restructuring experience," he had never seen "such a complete failure of corporate controls and such a complete absence of trustworthy financial information as occurred here."

Ray formerly served as CEO of Enron after the implosion of the energy titan.

In a matter of days, FTX went from a $32 billion valuation to bankruptcy as liquidity dried up, customers demanded withdrawals and rival exchange Binance ripped up its nonbinding agreement to buy the company. Gross negligence has since been exposed. Ray added that a "substantial portion" of assets held with FTX may be "missing or stolen."

FTX has more than 1 million creditors, according to updated bankruptcy filings, hinting at the huge impact of its collapse on crypto traders and other counterparties with ties to Bankman-Fried's empire.

Correction: A subsidiary of BlockFi also moved for bankruptcy in Bermuda, not the Bahamas.

11H Ago
The Ethics Of Mixing
Is mixing or coinjoining ethical? In his essay the author discovers how much harm banking regulation cases to customers and why mixing is ethical.d
Bitcoin
bitcoinnews.com
13H Ago
Bitcoin price is up, but BTC mining stocks could remain vulnerable throughout 2023
Bitcoin
allcryptonews.site
14H Ago
CoinJoin: Compare All Implementations 2023
It is obvious that no one agrees on “how to do CoinJoins right” and how to best optimize user privacy with block space efficiency
Bitcoin
bitcoinnews.com
14H Ago
Gold mining contaminates land and fresh water, so why all the focus on just bitcoin mining?
While there have been improvements to mining practices in recent years, significant environmental risks remain. Negative impacts can vary from the sedimentation caused by poorly built roads during exploration through to the sediment, and disturbance of water during mine construction. Water pollution from mine waste rock and tailings may need to be managed for decades, if not centuries, after closure.
Bitcoin
safewater.org