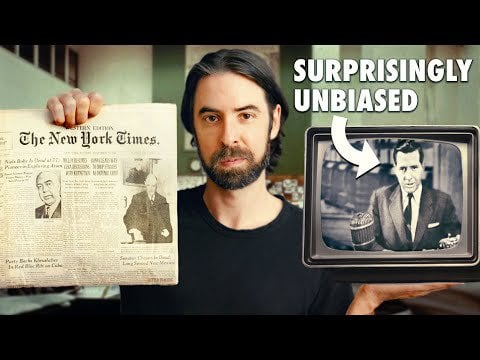 This video gets into how TV news in the USA has changed. https://www.youtube.com/watch?v=ZgZPJpdmw3A

Long story short, Prior to the gov getting rid of the Fairness Doctrine TV news stories by law had to pretty much be fact based. Like there was no spin, there was no bias, and so on.

I highly recommend reading this https://www.medialit.org/reading-room/whatever-happened-news

Several of the "news" companies and shows sued each other, and judges have even ruled they are entertainment and not "news". https://www.cbsnews.com/news/judge-tosses-suit-trump-affair-story-fox-news-tucker-carlson/ (this has happened to others BTW)

Which means it's all a bunch of reality TV BS more about getting money vs being honest. There is even examples of news stations before and after the change. Where before they were very much fact based, where now they are very much entertainment.

news went from a money loser but by law they had to have it. To getting rid of the law and going for making as much money as possible. To the point of going so far off that legally they are marked as entertainment and not news.

Educate those around you

P.S. you can easily use this to show whomever why they shouldn't follow every word of someone. How at the end of the day it is just entertainment and money making vs truth telling which is unprofitable.

2H Ago
Goldman Sachs Awkwardly Reports Bitcoin as Best Performing Asset of 2023 In Report
The financial group Goldman Sachs is known in the cryptocurrency community for historically taking anti-Bitcoin stances, however according to their year-to-date asset return report by the company, Bitcoin so far is the best performing asset of the year.
Bitcoin
blog.bosstrack.com
4H Ago
FTX creditors revealed: among them Goldman Sachs, JPMorgan, Wells Fargo - they should have invested in Bitcoin instead of out-of-thin-air shitcoin IOUs.
FTX Creditors - Free download as PDF File (.pdf), Text File (.txt) or view presentation slides online. FTX released its creditors list during its ongoing bankruptcy proceedings.
Bitcoin
scribd.com
4H Ago
Bitcoin is Not a Hedge - Gradually, Then Suddenly #18
Originally published in Parker’s dedicated Gradually, Then Suddenly publication.  Bitcoin is often described as a hedge, or more specifically, a hedge against inflation. Chamath Palihapitiya, respected in many circles as a venture investor, once described bitcoin on CNBC as schmuck insurance, qualifying that it’s the single best hedge against the traditional financial infrastructure, “just in case.” […]
Bitcoin
unchained.com
6H Ago
Why I think Bitcoin could be a key to saving the environment - City A.M.
Susie Violet Ward busts some myths on Bitcoin's environmental credentials urging users to understand the technology to understand the value.
Bitcoin
cityam.com